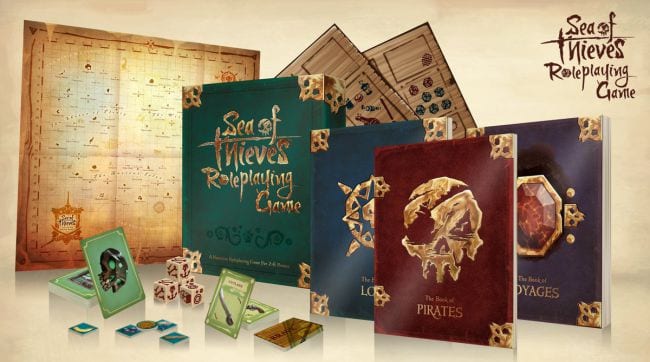 Sea of Thieves sets players on a ship with various sized crews tasked with setting sail and discovering adventure within the open world around them. Whether by engaging fellow players in PvP combat, fighting off skeletons and all manner of deep-sea monsters, or even by digging into the earth in search of riches, the game has plenty to offer for the aspiring pirate. While the journey itself is currently available as a video game, soon players will be able to also experience the Sea of Thieves as a tabletop adventure as well.

Mongoose Publishing, a company responsible for creating various tabletop titles such as Traveller, Legend, and Paranoia, has stepped up to bring fans a new game set within Rare’s unique pirate title. According to the company’s webpage for the game, Sea of Thieves veterans will no doubt notice feel right at home with the tabletop title as they attempt to become legendary pirates once more.

Using the new Avast system for quick and easy play, you will race other pirates to buried treasure, fight Skeleton Captains on tropical islands, tackle Voyages for the Gold Hoarders, Order of Souls and Merchant Alliance, and brave Megalodons and Krakens as they rise up from the depths to thwart your enterprises. Based on the popular video game available for Xbox One and Windows 10 PC, the Sea of Thieves Roleplaying Game has everything you need to create exciting pirate tales on the tabletop. The rules are designed for quick, immersive roleplaying that favours action, problem-solving and above all, fun!”

Players can pick up the title as a PDF ebook or as a box set. While the digital version is only priced at $38 the box set will run players $76 and will include the following:

Sadly, the Lord Guardian Sails that are mentioned above can only be gained through pre-orders of the tabletop game, though whether or not this is only for the box set or perhaps is also included in the digital version is unclear. Still, they do look quite snazzy and would make an excellent addition to any pirate’s vessel.

The tabletop game is expected to arrive sometime this October, though no exact release date has been given. Let us know your thoughts on a Sea of Thieves tabletop game and more in the comments section below. As always don’t forget to follow Don’t Feed the Gamers on Twitter for 24/7 coverage of all things gaming and entertainment.

Cyberpunk 2077 Devs Shooting For 2019 Release, But That Likely Isn't Happening