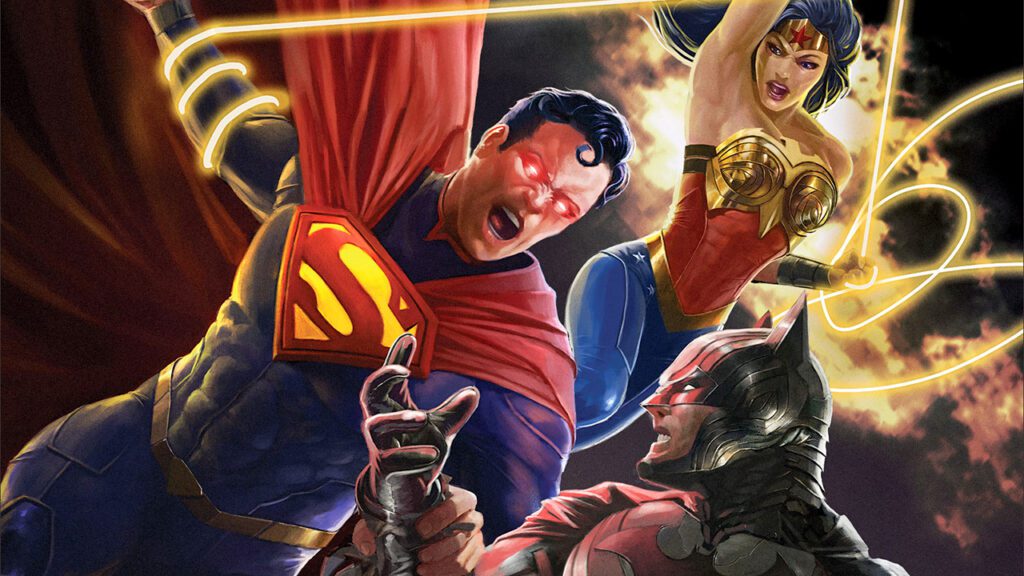 Based on the NetherRealm Studios video game and DC comic book series, Injustice: Gods Among Us is set to get a feature adaptation from WB Animation. The film is confirmed to feature an A-list voice cast and a plot very reminiscent of the source material, but very little has actually been revealed outside a single screenshot image. Now, the Injustice movie has finally unveiled its first trailer, teasing the epic clash between Batman and severely sinister Superman.

In a new minute-long trailer released with IGN, the first Injustice movie footage isn’t particularly long, but provides a nice tease of the twisted events to come. Hinting at a villainous turn for Superman, the trailer shows off the dastardly plot of The Joker as he carries out his plan to destroy everything the Kryptonian holds dear. We see Lois Lane and the superhero’s famed city of Metropolis reduced to rubble, as well as the first inklings of the violent, totalitarian version of Superman from the games. Check it out below.

The Injustice movie was first “announced” in a particularly low-key fashion, hidden within the special features of another movie altogether. However, a more official reveal happened shortly after, rolling out a star-studded voice cast, a first look image, as well as the epic cover art for the DC Comics adaptation. This new bloody NetherRealm adaptation comes after WB Animation’s work on the Mortal Kombat Legends movies, which also haven’t shied away from the series’ more violent and over-the-top tendencies.

Exciting times for us at @NetherRealm. pic.twitter.com/4YOytmfAUD

As for the video game source material, NetherRealm has hinted at the idea of another Injustice following the release of two successful entries. However, these small teases – mostly at the hands of NetherRealm’s infamously troll-happy Ed Boon – have not amounted to much in terms of official announcements, even as the developer officially shifted focus to a mysterious next project. With that said, that hasn’t stopped speculation regarding the potential future of the series.

What do you think? Are you excited about the upcoming Injustice movie, or are you just wondering whether Injustice 3 will ever see the light of day? Let us know in the comments below and be sure to follow Don’t Feed the Gamers on Twitter and Facebook to be informed of the latest gaming and entertainment news 24 hours a day! For more movie and TV headlines recently featured on DFTG, check out these next few news stories: