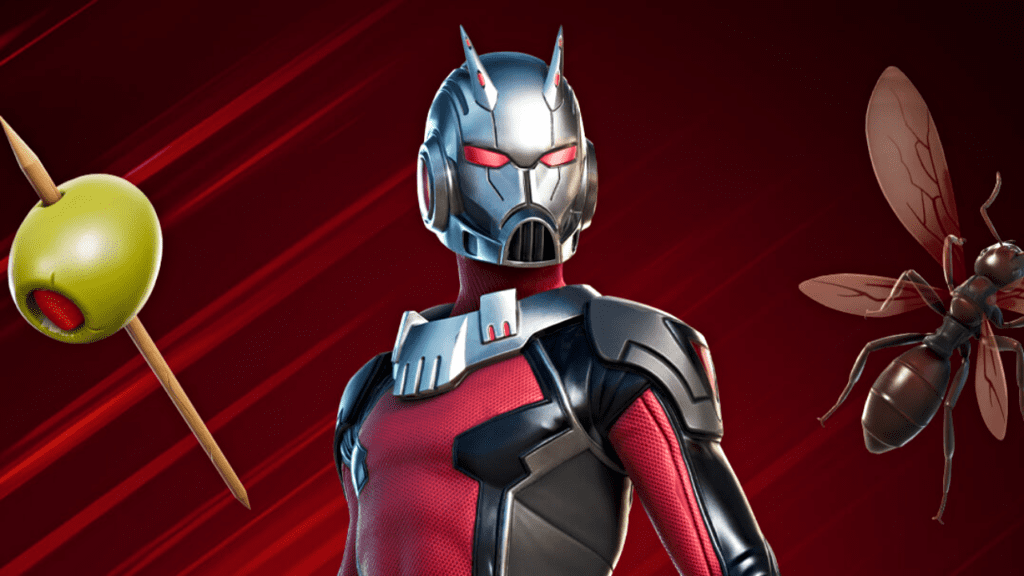 Ant-Man and his trust itty-bitty pals have joined Fortnite. As the latest character and Marvel superhero to join the battle royale game, Ant-Man is ready to take on any foe — big or small! Designed by Hank Pym, Ant-Man gets a creepy crawly flying ant as back bling and a green olive on a toothpick for his pickaxe!

Sorry we didn’t see you there Ant-Man.

In terms of the ability to shrink, here’s what Epic Games said: “Ant-Man may be his human height on the Island, but that doesn’t mean you can’t shrink him down with the power of perspective. For our next Fortography theme, make Ant-Man (or any character!) seem tiny with your in-game photos. This means more than just zoomed-out screenshots — use your photography skills to make your subject seem legitimately micro. (For example: Make a tree seem giant in comparison!) Share your photos with us on Twitter by using the #Fortography hashtag!”

Other iconic characters to join the hunt include Chun-Li and Ryu from Capcom’s Street Fighter series, Halo’s Master Chief, Tron, and many others. As a joint crossover comic miniseries, DC sends Batman into the digital world of video games in Zero Point. It features six issues for print and digital purchase beginning April 20th where Batman must investigate a tear in reality that looms over the city of Gotham.

According to DC: “Batman/Fortnite: Zero Point uncovers secrets never before revealed in game or anywhere else! Every fan of Batman, Fortnite, stunning art and edge-of-your-seat excitement won’t want to miss the Caped Crusader facing off against Fortnite champions on the Island in a desperate attempt to save not only himself, but other familiar faces from the DCU…and perhaps the Multiverse itself!”

Each print issue of Zero Point purchased comes with a redeemable code for DC-themed Fortnite content that can be used in-game. Redeeming all six codes will unlock a grand prize of an Armored Batman Zero Point outfit.

Which ones have you purchased? Do you like the crossover content? Let us know what you think in the comment below or start a conversation on Don’t Feed the Gamers Facebook page. To stay up to date on gaming and entertainment news as it happens, follow us on Twitter! Here are some of our latest: