The nostalgia cycle has brought back many classic video game franchises in recent years, with one of the more successful reiterations having been the return of Crash Bandicoot. The marsupial created by a once small studio named Naughty Dog found a welcome resurgence with the Crash Bandicoot N.Sane Trilogy of remastered games. Developer Toys For Bob proved so worthy of handling Crash Bandicoot with care, they were given the green light to create a brand new core entry in the series as well. Now, some influencers have been given strong hints at yet another new Crash Bandicoot game being announced this year.

YouTube user Canadian Guy Eh recently shared a new video on their official YouTube channel focusing on a Crash Bandicoot package sent to them by Activision. The package comes in a pizza-style box with an “Aku-Aku’s Steam-In Pizza Shack” logo on it. The contents of the package (and the obvious reference in the Pizza Shack name) seem to have been sent to celebrate the release of Crash Bandicoot 4: It’s About Time on Steam on October 19th, after it was previously only available on PC through Battle.net. What was particularly interesting about the package was an included note that hinted at a new Crash Bandicoot game announcement. 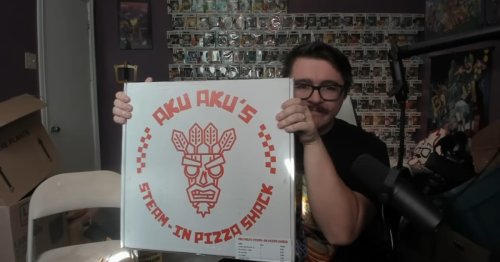 The box contained a pizzeria-style receipt that read “Hungry for more? Try out our new Wumpa Pizza for $12.08!” at the bottom. The YouTuber points out that 12/8 is the date that The Game Awards will occur later this year. It seems quite likely that a new Crash Bandicoot game might be announced during that event. Not much else is revealed about the potential new game, though it has been rumored that Toys For Bob has been working on a 4-player brawler-style game called Wumpa League. Whatever this new game ends up being, it’ll be good to see the wacky Australian rodent return once more.

What would you guys like to see in a new Crash Bandicoot game? Let us know in the comments below! Be sure to stay tuned for the latest Activision news, such as the shareholders voting to keep current Activision CEO Bobby Kotick in place, here on Don’t Feed the Gamers! Follow us on Twitter to see our updates the minute they go live!