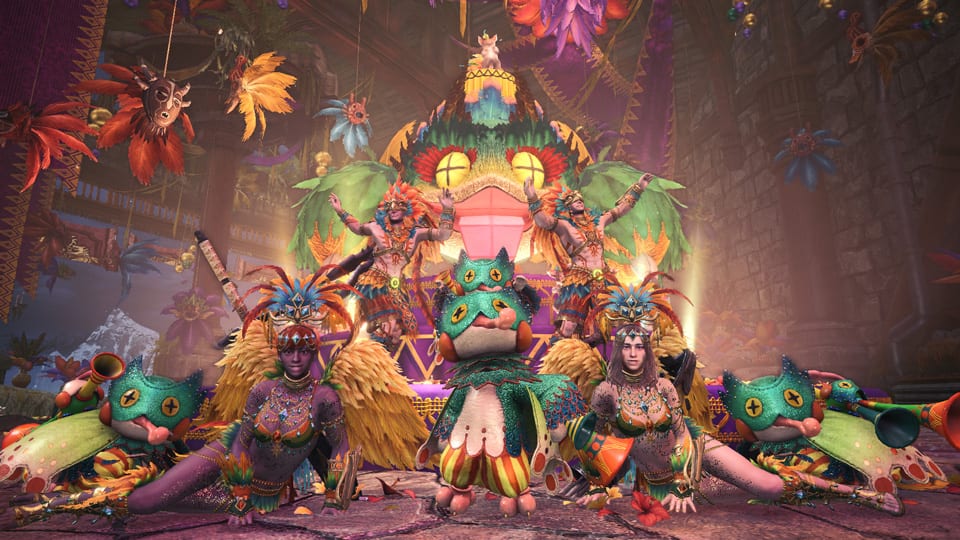 A huge update is coming to Monster Hunter World: Iceborne! As the fourth free title update to the game since it released in 2018, the developers at Capcom have plenty in store for players all through Summer and Fall of this year. In addition to the reintroduction of two gargantuan monsters, Monster Hunter World: Iceborne get to celebrate the Astera Summer Twilight Fest and Seliana Sizzling Spice Fest later this year. Check out the dev diary below for an in-depth look at the roadmap, monsters, and more:

On July 9th, Alatreon makes its fearsome return to the franchise. There will be a week’s worth of free decorations to grab up to celebrate this momentous occasion beginning Friday, July 3rd until Friday July 10th. Then from July 22nd to August 6th, players can get into the spirit of Brazil’s Carnival-themed festivities during the Astera/Seliana seasonal event dubbed the Sizzling Spice Fest.

From August 7th  to August 19th, hunters get a chance to encounter another monster – Frostfang Barioth during the event quest “The Last White Knight.” Of course, the appearance of both formidable foes come with unique armor sets as well – you can’t miss those! As for the firth major title update for Monster Hunter World: Iceborne, Capcom plans on a returning monster, another festival, and a “master rank layered armor.” Check out the roadmap below: 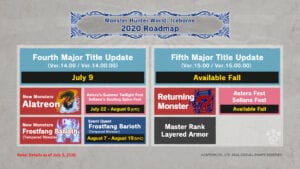 For additional details on Alatreon, Frostfang Barioth, and other upcoming Monster Hunter World: Iceborne updates, be sure to check out the official website here or watch the developer’s diary in its entirety above.

Are these updates for Monster Hunter World: Iceborne tempt you into getting back into the game? What do you look forward to the most? Let us know what you think in the comments section below or start a conversation on Don’t Feed the Gamers Facebook page. To stay up to date on gaming and entertainment news as it happens, follow us on Twitter! Here are some of our latest: