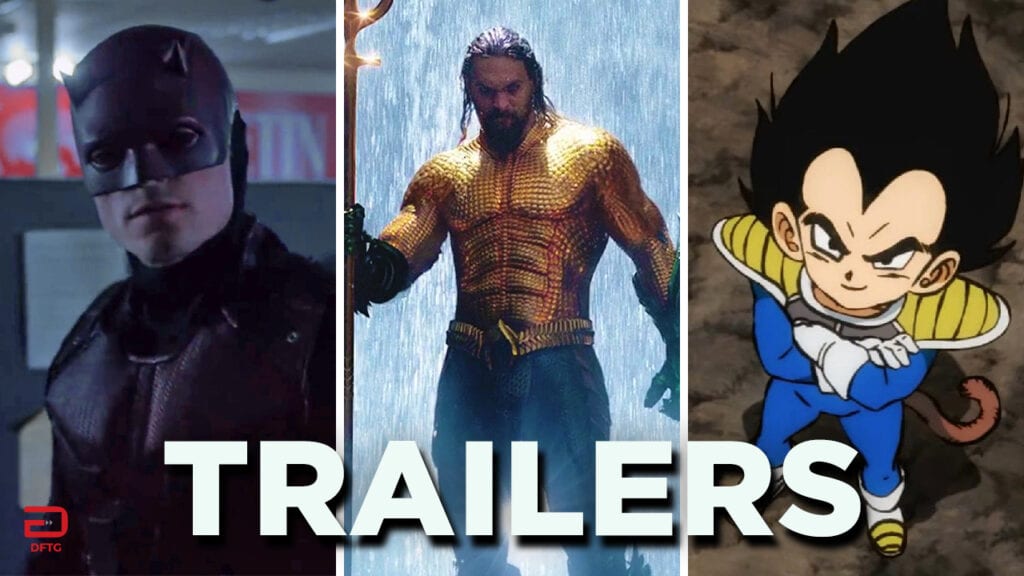 A new week is now upon us, and that equates to another bout of trailer reflection here at DFTG. This year’s edition of New York Comic-Con brought trailers covering an exciting bevy of superhero TV and movies, highlights including the dark depths of Daredevil, the aquatic adventures of Aquaman, and the surprising Saiyan origins of Dragon Ball Super: Broly. Check out the list below as we recap the biggest movie and TV trailers of the week.

Dragon Ball has teased a number of foundation-shaking revelations for the upcoming Dragon Ball Super movie, one of which takes the fan-favorite behemoth Broly and places him firmly into the mainline canon. One previous trailer, while an intense and epic way to introduce this rebooted Broly, didn’t share much inkling of these reveals.

Well, that all changed with the newest Dragon Ball Super: Broly footage, notably showing the origins of the film’s three alien Saiyans: Goku, Vegeta, and Broly. It’s revealed that the trio were all small children at around the same time, with each being sent off-planet moments before their world was destroyed by the Frieza Force. The trailer suggests these fated circumstances set their destinies on a collision course when Dragon Ball Super: Broly hits US theaters on January 16th, 2019.

Following a spell of silence, a first look at the long-brewing Harley Quinn animated series was shown off at NYCC and the result was rather, well, animated. Gotham’s clown queenpin is just as lovably insane as one would expect, except she’s packing some hilariously colorful language delivered by actress Kaley Cuoco. Taking a page from Marvel’s Deadpool, Harley breaks the fourth wall to address the series’ lack of dark broodiness and how much fun the viewer will have, lest their brains become flattened by her signature hammer. Harley Quinn will premiere on the DC Universe streaming service.

The state of DC movies isn’t the strongest as of late (or maybe it is), having produced a bundle of largely divisive duds, our stunning savior Wonder Woman notwithstanding. Rumors of Ben Affleck’s Batman and Henry Cavill’s Superman hanging up their respective capes aren’t doing much for fan enthusiasm either, but a glimmer of hope can be found in the future of DC’s film slate, namely James Wan’s incredible-looking Aquaman movie.

A five-minute Aquaman showcase recently premiered and set the internet ablaze, an ironic notion considering the film’s abundance of water. Of course, the wet stuff isn’t the only life-giving feature filling the movie’s footage, as it also previews a set of fantastic action scenes, an epic undersea scope, and, yep, that’s Dolph Lundgren too! All hype ramps up to Atlantean proportions upon peeking the video’s final shot, a glorious reveal of Aquaman’s iconic orange and green costume! Oh, you’ll definitely see my tailfin seated for Aquaman when it hits theaters on December 21st.

She-Ra and the Princesses of Power – Season 1

A modern adaptation on the classic 80s series She-Ra was given a super-powered announcement earlier this year, but the exploits of Etheria’s cosmic warrior princess were fully unveiled at this past NYCC. Adora’s origins alongside the Evil Horde are challenged when she discovers the magical Sword of Protection, instantly transforming her into the legendary Princess of Power. Also, she gets a flying rainbow unicorn, so an eventual tun to the side of good is pretty much expected at that point. Season 1 of She-Ra and the Princesses of Power will premiere on Netflix November 16th.

Marvel’s blind harbinger of justice Daredevil was left in a tough spot at the end of Defenders, so much so that a full year has passed since we last saw the horn-headed vigilante. In terms of the Devil’s solo series it’s been even longer, a fact very evident by the considerably darker mindset Matt Murdock sports in the past few trailers for Season 3.

Ahead of this month‘s premiere, Netflix unveiled a new round of footage for the show’s third outing, and it looks as though Daredevil is dealing with more than just his inner demons. The brutal wrath of Wilson Fisk looms high as the Kingpin of crime secures his release from prison, this time with the goal of turning the public on his foe once and for all. This unleashes a bloodthirsty faux-devil upon Hell’s Kitchen and despite the assertion he’s the real deal, we’re pretty sure this guy is (ahem) someone else. We’ll see if Daredevil loses the bullseye on his back when Season 3 premieres on October 19th.

Ever since Archie Comics’ made its edgy crime reimagining in Riverdale, a live-action adaptation of The Chilling Adventures of Sabrina always seemed like the (super)natural next step. The comic book story had already become popular for its horrific take on the magical side of the Archieverse, and Netflix seemed a clear fan based on the gloriously macabre trailers we’ve seen so far.

The newest footage very much continues in this bizarre vein, seeming to revel in its juxtaposition of bubbly teen drama and unflinchingly Satanic witchcraft. This clash is even more intense from Sabrina’s perspective, as she’s forced to choose between her witchy ways or live life as an ordinary human forever. Still no confirmation if Sabrina’s sassy cat Salem will be talking this time around, but he’d better when Season 1 of Chilling Adventures of Sabrina premieres on Netflix October 26th.

Spider-Man: Into the Spider-Verse

All the Spider-Men and Women of the Marvel multiverse collide in the upcoming Spider-Man: Into the Spider-Verse. No, this isn’t the huge comic book crossover event from a few years ago. This is the movie adaptation, but I’d understand why someone couldn’t tell the difference. The movie is covered head to toe in gorgeously-recreated comic book imagery, with main character Miles Morales and each additional iteration of the web-head looking straight-off-the-page in their relative styles.

We saw quite a few versions introduced in the movie’s most recent trailer, debuting the broody Spider-Man Noir, the anime-inspired Peni Parker, and the spectacularly goofy Spider-Ham. While vastly different, each of these heroes are well-established in Marvel lore and feature a unique spin on the traditional Spider-Man formula. They’ll join the established trio of Miles, Gwen Stacy and Peter Parker as they descend Into the Spider-Verse on December 14th. 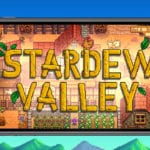 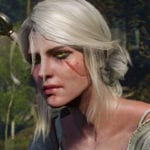 Netflix's 'The Witcher' Series Showrunner Opens Up About Ciri Backlash