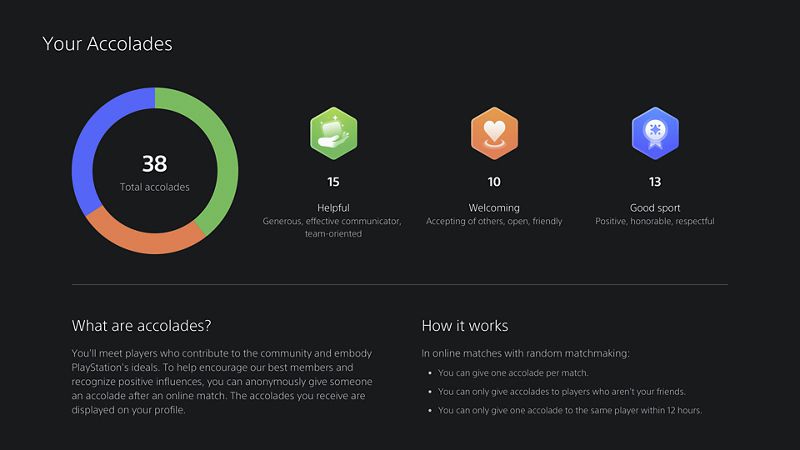 The PlayStation 5 has now been available to gamers (albeit with some supply chain issues thrown in) for nearly two years now. While the console is even more technologically powerful than its predecessors, its big unique steps forward come through its unique hardware and software features, like its DualSense controller. One aspect of their digital infrastructure that Sony has sought to make better has been their online multiplayer systems and preventing toxic behavior in them, just as the other big game companies have sought to do. Sony had implemented the PS5 Accolades system to do just that, though now it seems that the system is being taken down.

Sony has updated their official PlayStation website’s section focused on discontinued services recently. Most of this section is devoted to informing users when specific online functions lose their support, with many being the deactivated support for the PS3 and PS Vita consoles. The PS5 Accolades system has been a part of the console’s digital ecosystem since its launch in November of 2020. Now, Sony has confirmed that support for this service will be discontinued later this year, as the post states:

In fall of 2022, the Accolades feature on PlayStation 5 will no longer be supported. The feature hasn’t seen the level of usage we anticipated, so we are refocusing our efforts. We encourage the community to continue to send positive messages to one another.”

It would seem that Sony’s decision to discontinue the PS5 Accolades system is being made due to fairly inactive use of the program by users. Many reports covering this story have pointed out that many users were not even aware of this system being available (with yours truly writing this piece being one of them). While Sony is still hoping for gamers to be sending each other positive messages, it is still somewhat sad to see such a beneficial system being tossed away so quickly. Hopefully this inspires online players to be less toxic to each other, but getting a double-kill sniper headshot in any Call of Duty game seems easier than that.

What do you guys think about the PS5 Accolades system being removed by Sony? Let us know in the comments below! Be sure to stay tuned for the latest PlayStation news, such as the new premium games like Stray that have been added for PlayStation Plus Premium subscribers, here on Don’t Feed the Gamers! Follow us on Twitter to see our updates the minute they go live!