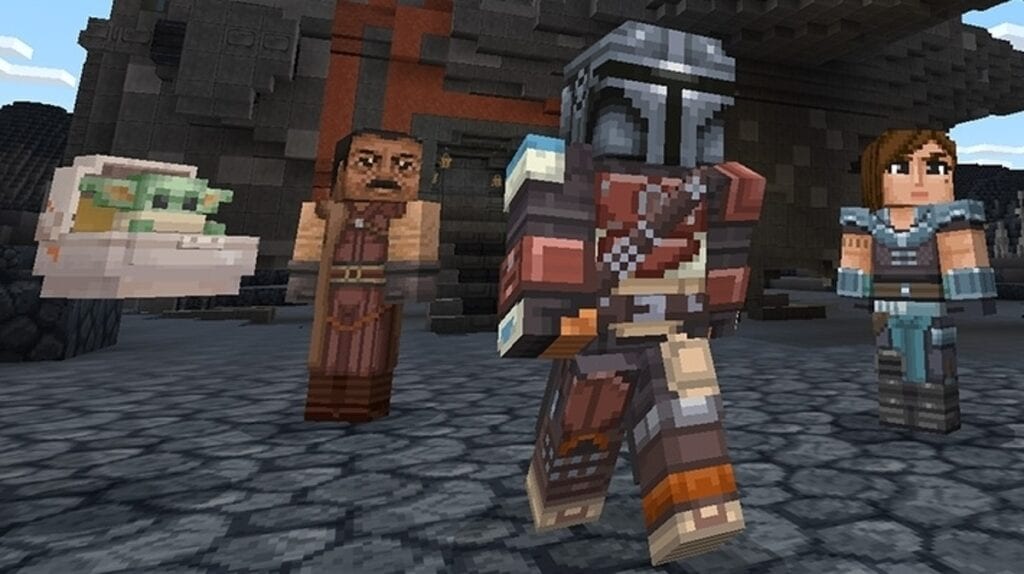 Easily the biggest new video game franchises to rise in the past decade has been Minecraft. The creative game started out as an indie curiosity and ended up becoming a multimedia juggernaut worthy of being purchased for $2.5 billion by Microsoft. Minecraft has notably crossed over with other properties in the years since, releasing DLC with characters from the Super Mario, Frozen, and Toy Story worlds, and recently Minecraft’s Steve even joined the roster of Super Smash Bros. Ultimate. Now, at long last, Minecraft Star Wars DLC has been announced, which will include content from the original trilogy and The Mandalorian.

The new Minecraft Star Wars DLC was recently detailed on the official developer blog, revealing that the new DLC brings content from the original trilogy of Star Wars films, as well as the new Disney Plus anthology series, The Mandalorian. Spanning twelve different planet dioramas, iconic locations like the Yavin IV temple and Echo Base from the original trilogy, as well as the Razor Crest and Nevarro from The Mandalorian, are present. Among the new skins are Darth Vader, Luke Skywalker, Princess Leia, Han Solo, Din Djarin, Greef Karga, and many more! Of course, Baby Yoda and his little floating hover pram are along for the ride as well.

The DLC pack also includes a full bespoke texture set, mob and item reskins, UI treatment, and a licensed soundtrack. The full Minecraft Star Wars DLC pack is now available on the marketplace for 1300 Minecoins, which roughly equates to a $5 purchase. There was a Star Wars skin pack released years ago, but these skins are significantly more detailed, and the texture sets are way more dynamic. Combined with all of the other new elements and Mandalorian content, this is the perfect addition for any Minecraft-playing Star Wars fan. Just make sure you keep those creepers away from Baby Yoda. This is the way.

What do you guys think about the new Minecraft Star Wars DLC? Let us know in the comments below! Be sure to stay tuned for the latest Minecraft news, such as the big Minecraft Caves and Cliffs update announced for release next summer, here on Don’t Feed the Gamers! Follow us on Twitter to see our updates the minute they go live!