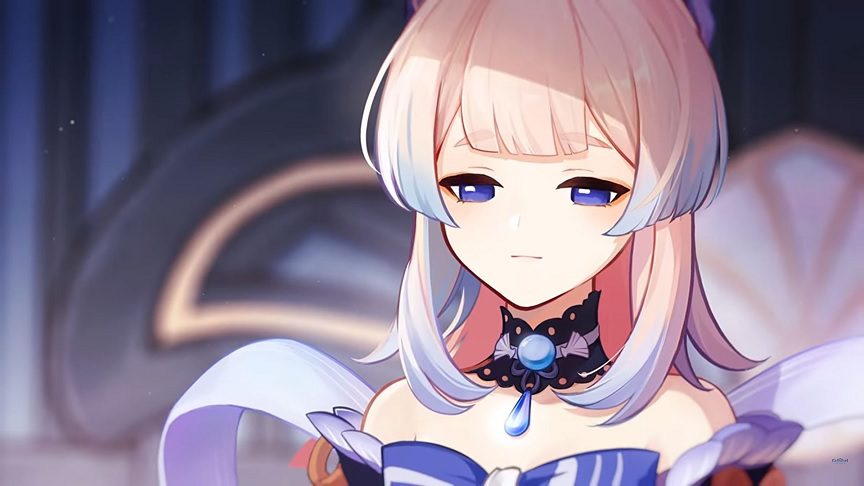 The time of the Raiden Shogun is nearly over, with the first Genshin Impact Version 2.1 character banner fading away with the arrival of the latest upcoming unit, Sangonomiya Kokomi. While the new Hydro character may represent a ‘hard save’ for players interested in some of the other characters on the horizon, the Divine Priestess of Watatsumi Island is nonetheless the next max rarity unit to appear. Ahead of her arrival, Genshin Impact has revealed the details of her upcoming character event wish and accompanying weapon summoning banner.

Travelers, stock up on weapons and characters in the event wish to make your party stronger in combat!#GenshinImpact pic.twitter.com/hVz15TTGm7

Genshin Impact developer miHoYo has revealed the details of the Sangonomiya Kokomi character banner. Titled Drifting Luminescence, the limited-time event wish kicks off on September 21st at 19:00 server time and runs until October 12th at 15:59 server time. Sangonomiya Kokomi is of course featured on the banner as the max rarity character, while Rosaria, Beidou, and Xingqiu bring up the rear as featured 4* rarity units.

Travelers, stock up on weapons and characters in Epitome Invocation to make your party stronger in combat!#GenshinImpact pic.twitter.com/Xxhjb47iFl

As for weapons, the latest Epitome Invocation takes place during the same date range as the aforementioned character banner. Both Primordial Jade Cutter and the new Everlasting Moonglow are featured as the banner’s max rarity weapons, while The Flute, Favonius Greatsword, Dragon’s Bane, Favonius Codex, and The Stringless are all available on the banner as 4* weapons.

(Examples of the following weapon based on Level 90 and Refinement Rank 1)#GenshinImpact pic.twitter.com/NynNwdOOxS

As for the new weapon, the Catalyst Everlasting Moonglow is far and away the best weapon available for Kokomi, offering decent base ATK and 49.6% HP for the weapon’s substat. The weapon provides healing bonuses and sports ATK DMG that scales off max HP, as befitting for the character players are already referring to as Barbara 2.0. The weapon pity system established with the arrival of the Inazuma region is still in effect here, so players unlucky enough to pull two Primodial Jade Cutters or other max rarity weapons will be guaranteed an Everlasting Moonglow upon pulling a third max rarity weapon. Is it worth it? Well, we’ll leave that up to each individual player to decide for themselves.

Thoughts on the upcoming character and weapon banners? Plan on pulling for Sangonomiya Kokomi? Let us know in the comments section below, and as always, stay tuned to Don’t Feed the Gamers for all the latest gaming and entertainment news! Don’t forget to follow DFTG on Twitter for our 24/7 news feed!