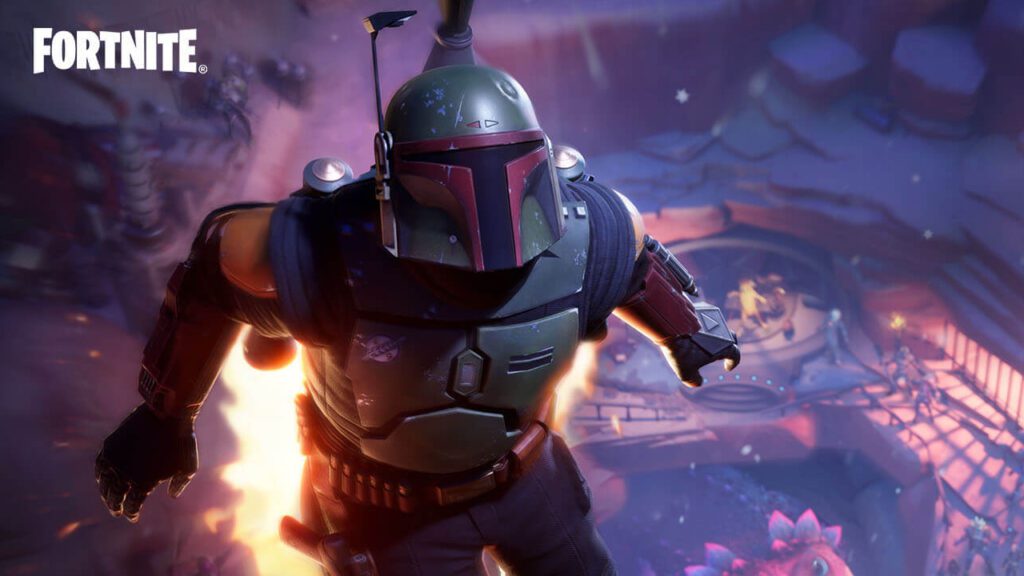 With the end of the year here, and a noticeably absent third season of The Mandalorian and precious Baby Yoda nowhere to be found, it has fallen upon none other than Boba Fett to take up the focus of Star Wars for this season. The spinoff series of The Mandalorian is set to premiere later this week on Disney Plus. Fortnite has already been quick to cross over with Star Wars, having featured the Mandalorian and Baby Yoda last year. Now, to help celebrate the new spinoff series, new Fortnite Boba Fett crossover content has been added to the game.

If you can survive a sarlacc pit, nothing’s impossible!

Epic Games has unveiled the new Fortnite Boba Fett event on their official Twitter profile. The video shows Boba in his look from The Mandalorian and new series, with his classic armor now over a black tunic. Boba is also seen gliding onto the map with his signature starship, formerly known as a name that Disney would rather you forget. The video also shows Boba utilizing his trusty Gaffi stick, featured in the series as a melee weapon, but portrayed in Fortnite as a pickaxe.

As per the Epic Games blog post, the new Boba Fett outfit also comes with the character’s classic Z-6 Jetpack, included as back bling along with the skin. The attire also comes with a Targeting Computer Online emote, which shows his helmet’s antenna fold down to feature the hunter scanning for his prey. All of these Boba Fett crossover goodies can be purchased from the Fortnite store for 2.300 V-Bucks. Boba Fett fans will want to act quickly to make sure that they don’t miss out on this bounty of a lifetime. Here’s hoping Fortnite eventually adds a Han Solo skin so Boba can get his revenge against Captain Solo, freezing him in carbonite again and putting him in the cargo hold.

What do you guys think about the Fortnite Boba Fett crossover content? Let us know in the comments below! Be sure to stay tuned for the latest Star Wars news, such as the new Star Wars Eclipse reveal trailer by Quantic Dream, here on Don’t Feed the Gamers! Follow us on Twitter to see our updates the minute they go live!