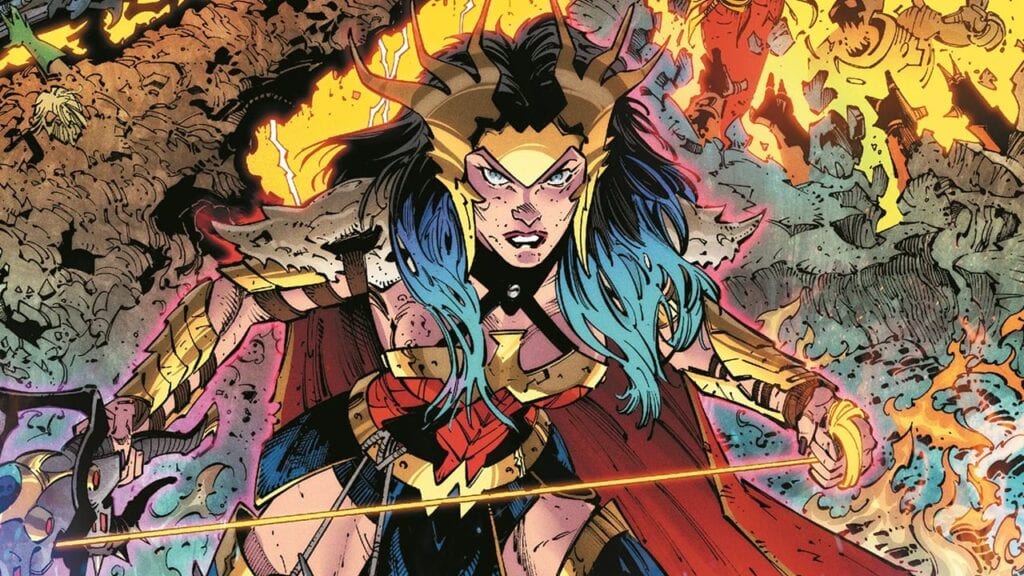 Considered one of the most wide-reaching and horns-raising storylines in recent memory, Dark Nights: Metal introduced readers to a twisted league of evil Batmen that reigned over a nightmare vision of the DC universe. Though the epic and successful story saw its grand finale in 2018, it looks like the face-melting saga is now set to continue with a new over-the-top tale titled Dark Nights: Death Metal.

Revealed in a new official press release, DC Comics confirmed writer-artist collaborators Scott Snyder and Greg Capullo would return to helm the headbanging sequel, the duo also employing the talents of inker Jonathan Glapion and colorist FCO Plascencia. The new storyline is teased as being just as bonkers as ever, with the story’s events seeing the Earth “consumed by Dark Multiverse energy” and taken over by the terrifying Batman Who Laughs as well as his corrupted legion of “evil lieutenants” including Shazam, Supergirl, and even Batman’s bestie Commissioner Jim Gordon.

“Some heroes, like Wonder Woman and the Flash, have made compromises as they negotiate to keep humanity alive in this hell-born landscape,” the synopsis continues. “Others, like Batman, are part of an underground resistance looking to take back control of their world. Superman is imprisoned, cursed to literally power Earth’s sun for eternity. But a mysterious figure provides Wonder Woman with vital information she might be able to use to rally Earth’s remaining heroes to resist the Batman Who Laughs. Can the Justice League break away from the Dark Multiverse and defeat Perpetua?”

Dark Nights Death Metal is set to release as a six-issue miniseries on May 13, 2020, with follow-up issues arriving every month thereafter. In addition, several unspecified one-shot stories are also set to release through the remainder of the summer, each with the goal of expanding the DC Metalverse. “I’ve been waiting to do this story since we finished Dark Nights: Metal,” Snyder revealed in the press release. “As much as it was a complete event, we left some threads hanging there for sure. I’d hoped that if people liked the first series enough, we’d have a chance to set up something bigger, and that’s our plan for Death Metal.”

Ahead of ‘Death Metal’, Snyder and Capullo previously worked together on a number of similarly epic Batman runs, including the modern classic Court of Owls storyline as well as a standalone featuring the Batman Who Laughs. Last year saw the duo reunite with Last Knight on Earth, telling the Caped Crusader’s final days in the midst of a Mad Max-style wasteland. While not a canon addition to the Metalverse, it continued the very over-the-top aesthetic of Dark Nights leading up to the recent reveal of Death Metal.

“For all of us, Dark Nights: Death Metal is about the fun factor,” Capullo added. “Comics should be fun, bombastic, and over-the-top. This series is going to be exciting and jam-packed with great ‘metal-esque’ moments that will make fans lose their minds when they see them.”

What do you think? Are you looking forward to a Dark Nights: Metal sequel, or do you feel that the first one will be tough to top? Let us know in the comments below and be sure to follow Don’t Feed the Gamers on Twitter and Facebook to be informed of the latest gaming and entertainment news 24 hours a day! For more headlines recently featured on DFTG, check out these next few news stories:

Uncharted Movie Has One Of The "Best Scripts" He Has Ever Read, Says Tom Holland