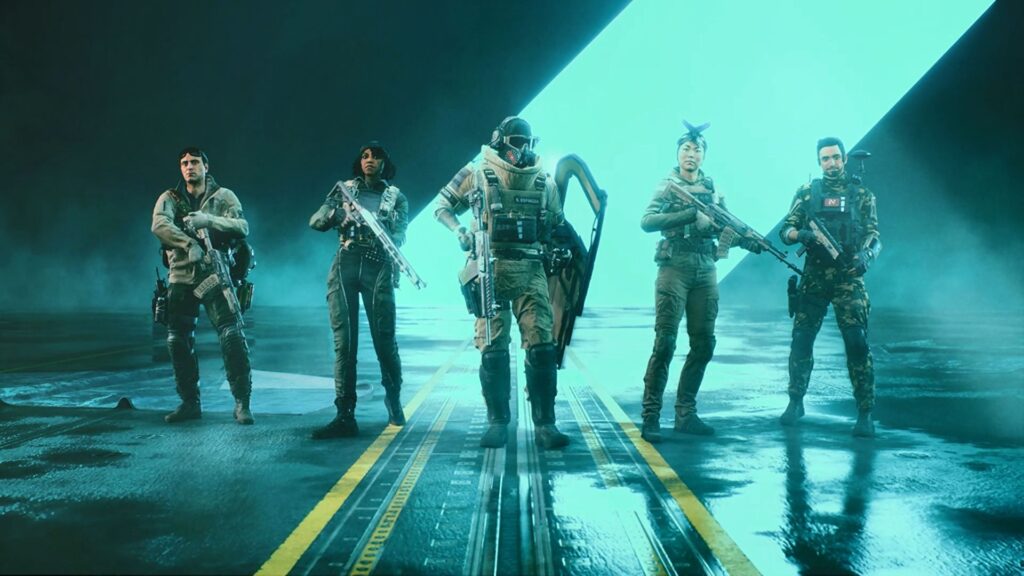 Throughout the beta testing period for Battlefield 2042, players were only allowed to pick for a select few Specialists that would be arriving in the full launch of the title later this year. While it gave fans a chance to test the waters for what the upcoming game could provide, it was understandably a bit restrictive on what players could make use of. A new trailer has arrived showing off a few more of the Specialists that will be available at launch, hopefully bringing enough variety to make things even more interesting.

Fans have received the first look at 5 new Specialists: Navin Rao, Ji-Soo Paik, Santiago “Dozer” Espinoza, Emma ″Sundance″ Rosier, and Constantin ″Angel″ Anghel. Navin Rao is a Recon specialist of Indian descent who is capable of utilizing a Cyber Warfare Suite that lets him scramble vehicle systems, trigger base defenses, and disable Rangers all while being at a distance. He can hack into enemy systems to gain valuable intel on enemy locations after killing a hacked target.

Ji-Soo Paik is another Battlefield 2042 operator who takes advantage of technology in combat. The South Korean Recon Operator utilizes an EMG-X Scanner that provides an electromagnetic overlay, highlighting her enemies both in and out of cover. The overlay can even penetrate through walls meaning no one is safe from her gaze. Her ability to triangulate enemy positions while taking fire makes her an observant Operator who will no doubt be difficult to hide from.

Santiago “Dozer” Espinoza is an Assault class Operator who, rather than focusing on technological prowess, takes advantage of his ability to adapt to a variety of situations, mainly situations of an explosive nature. Dozer’s trait “Blast Resistant” allows him to take less damage and a faster recovery time from explosive weaponry. Top this off with the SOB-8 Ballistic Shield and the Operator is capable of withstanding a wide range of attacks.

The French Operator Emma “Sundance” Rosier takes advantage of a variety of equipment to change the tides in her favor. With a wingsuit, she’s able to traverse long distances to get to the drop on enemies and with her Smart Explosives she’s capable of using a series of Anti-Armor, EMP, and Scatter Grenades that can seemingly hone in on targets to devastating effect.

Lastly, Constantin “Angel” Anghel brings in a bit more for Battlefield 2042 players who enjoy taking a bit of a Support role. Being a Trauma Specialist, Angel is able to quickly revive allies while fully restoring their armor and his ability to call in an airdropped loadout crate allows him to keep his allies in the fight with armor, new loadout options, and ammunition.

With these 5 Specialists on top of the 4 that were available in the late Beta, as well as returning characters to the Battlefield franchise, Kimble “Irish” Graves, hopefully, players will have enough variety to stay satisfied with their Battlefield 2042 experience. For a bit more information on the new Operators, fans can take a look at the updated Specialists page for Battlefield 2042. It’ll be interesting to see what the recently revealed Operators will bring to the table once players are able to try them out for themselves.

Battlefield 2042 is set to become available for PC, Xbox One, PlayStation 4, Xbox Series X/S, and PlayStation 5 on November 19th of this year. Do you fancy any of the recently announced Specialists for the upcoming title? Let us know your thoughts on the recent trailer for Battlefield 2042 and more in the comments section below. As always, don’t forget to follow Don’t Feed the Gamers on Twitter for 24/7 coverage of all things gaming and entertainment.