A new interactive Overwatch comic from Blizzard has been released dubbed “Uprising”, spinning the tale of the King’s Row uprising. Readers will get to see Tracer’s beginnings in Overwatch and get a glimpse of the past. That’s seven years ago to be exact, here’s a brief synopsis:

Seven years into Overwatch’s past—on the eve of a historic peace accord—King’s Row is seized by an extremist faction of robots known as Null Sector. The British government forbids Overwatch from interceding, which means Strike Commander Jack Morrison must decide whether to disobey orders or stand by while thousands of lives are in peril.”

This sets a pretty serious tone for the story, suggesting that many lives may be at risk. The interactive Overwatch comic sets Morrison, AKA Soldier 76, with the decision of giving Lena Oxton permission to move to active duty. We know her better as Tracer, but at the time the book is set she is recovering from a time-travel accident. Fans can get a peek at training with Genji, getting used to new time-jumping powers, and Tracer asking Morrison to deploy Overwatch to her home – King’s Row.

Plenty of other fan favorites hit the pages as well. Reinhardt, Ana, Torbjörn, and Mercy all make appearances in their classic uniforms; a possible tell of skins to come. Gabriel “Reaper” Reyes also shows up in the Blackwatch outfit. The book looks to be packed with the kinds of things that will get readers diving into the story!

The interactive Overwatch comic comes on the heels of a recent tease from Blizzard suggesting an upcoming event on April 11th. With a new season in full swing and enough time since the Lunar New Year event, it is possible that this announcement will be another seasonal event for Overwatch. Keep up with Don’t Feed the Gamers to find out what the news is as soon as it is released!

Looking forward to reading the interactive Overwatch comic? Any thoughts bubbling after finishing the book? Join in on the conversation in the comment section below or start one on Disqus! Don’t forget to follow the official Twitter for live gaming and entertainment news 24/7! 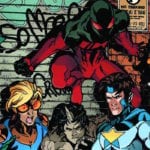