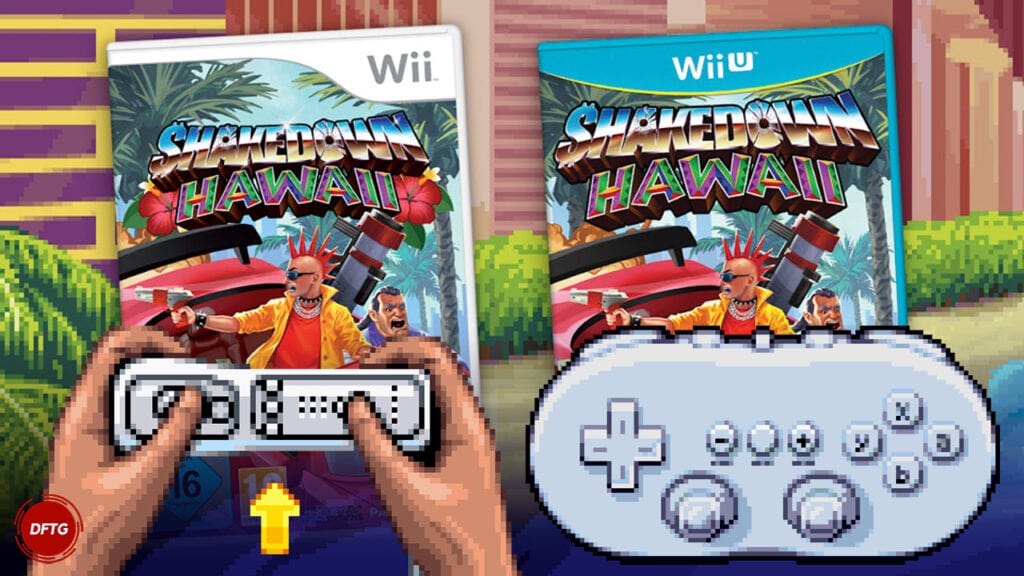 Since first launching just year, retro-themed action title Shakedown: Hawaii has seen its availability spread across several prominent platforms, including such underrepresented devices as the PlayStation Vita and Nintendo 3DS. Though bringing the old-school Grand Theft Auto-like to legacy handhelds is surely a feat in and of itself, it appears publisher Vblank Entertainment is aiming to go even further by producing pixelated ports for hardware from prior generations, namely, the Wii and the Wii U.

Announced on the company’s official blog, Shakedown: Hawaii was confirmed to be on the way for the two all-but-discontinued Nintendo systems, with each port set to include all updates and DLC from up to this point. Releasing July 9th, the Wii version includes support for 4:3 NTSC and PAL output as well as official Wii Classic and GameCube controllers. Similarly, the Wii U port supports both SD and HD modes and can be played from all compatible controllers, including the console’s signature screen-mounted GamePad peripheral. This version is scheduled to arrive sometime in August.

Shakedown: Hawaii — giving some love to all the controllers and video modes! Coming to Nintendo #Wii next month! pic.twitter.com/9q1mwre8uO

As support for the original Wii and Wii U dwindles by the day in 2020, seeing a 2019 release ported to the console is surely surprising, if not, exciting for those clinging to their beloved hardware of yesteryear. However, since years-old systems aren’t exactly a priority for Nintendo as of late, the team at Vblank encountered a few hurdles upon getting Shakedown: Hawaii on such older platforms. For one, Nintendo of America has since ended all support for the 7th-gen console, leaving the Wii port solely available in limited physical quantities (3,000 units) and European PAL format. However, the team was fortunate enough to also snag a Wii U version, which is planned to go out to Europe as well as North America.

Shakedown: Hawaii for Wii goes on sale starting July 9th, with ports for Wii U as well as Steam planned for sometime in August. The game is currently available on Nintendo 3DS, Nintendo Switch, PC, PlayStation 4, and PlayStation Vita.

What do you think? Are you currently dusting off your Nintendo Wii/Wii U for another adventure, or are you fine playing the game on modern consoles? Let us know in the comments below and be sure to follow Don’t Feed the Gamers on Twitter and Facebook to be informed of the latest gaming and entertainment news 24 hours a day! For more headlines recently featured on DFTG, check out these next few news stories: