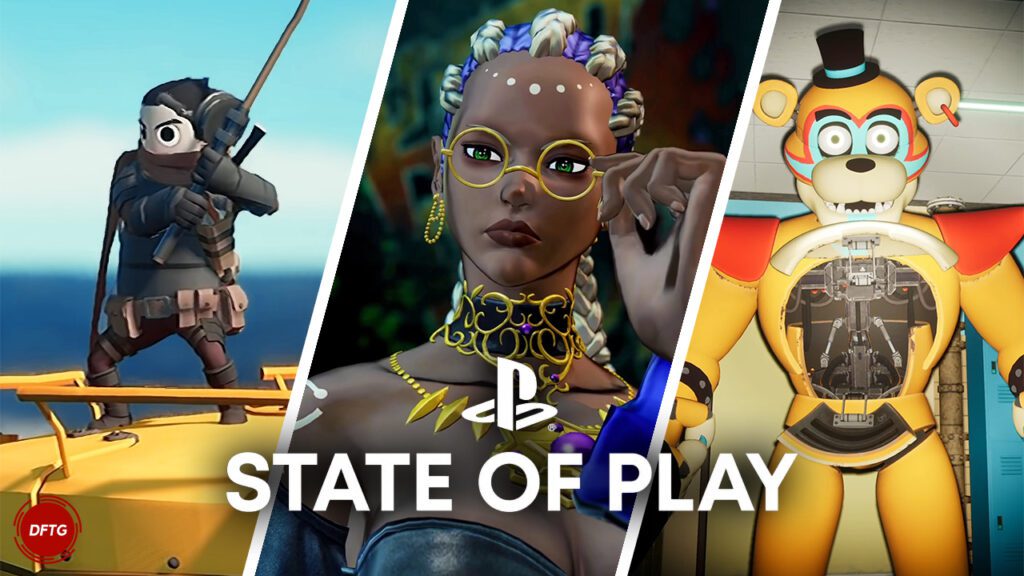 Sony has concluded another of its game-centric PlayStation State of Play presentations and this latest occasion has yielded quite a few announcements about upcoming indie titles. Mainly focusing on Neostream’s stylish in-development RPG Little Devil Inside, the event also unveiled several notable surprises such as a full-fledged new Star Ocean game from Square Enix and an appropriately big island expansion for Young Horses’ Bugsnax.

A full recap of announcements from October’s State of Play event can be viewed below.

The top of the showcase firstly introduced Deathverse: Let It Die, an intense new multiplayer brawler from developer Supertrick Games and publisher GungHo. Highlighting a retro-futuristic aesthetic and a bounty of varyingly fantastic and deadly weapons at players’ disposal, the title is set up as a survival game show set in the virtual afterlife construct known as Deathverse, taking place in the same continuity as Suda 51 and GungHo’s action-packed battler, Let It Die.

Deathverse: Let It Die is set to release for PlayStation 4 and PlayStation 5 in Spring 2022.

After making its initial debut at last year’s Game Awards ceremony, the music-themed narrative title We Are OFK is now confirmed to be in development for PS4 and PS5. Probably the most unique showing of the State of Play presentation, the game took a very meta approach as the team prepared for its big Sony announcement and summarized an adventure chronicling the vibrant rise of pop group OFK across 5 music video-themed episodes.

After nearly a year after launch, the new State of Play event also has us “talkin’ ’bout Bugsnax” once again. Under the aptly-named ‘Isle of BIGsnax’ update, Young Horses is set to introduce a breadth of new content, namely, an all-new island filled with gargantuan-sized Bugsnax. In addition, players can also expect a new shrinking mechanic, customizable living quarters, and numerous added activities when the update officially goes live early next year.

Bugsnax’s Isle of BIGsnax update is set to release for PC, PlayStation 4, and PlayStation 5 in Early 2022.

Offering the most ambitious spin on the horror series yet, it’s been a while since we last heard about Five Nights at Freddy’s: Security Breach. However, this latest event surely delivered the goods, offering a solid release date and showing a nice variety of gameplay as the player attempts to escape a night-fallen Freddy Fazbear’s Mega Pizzaplex. Players are shown to have quite the challenge ahead of them and can even operate a suit based on the bear himself.

Originally launched for PC, Xbox One, and Xbox Series X/S this past July, the bird-centric afterlife adventure Death’s Door is now officially coming to Nintendo Switch and (of course) PS4 and PS5 consoles. Divulged during the new Sony showcase, developer Acid Nerve assured a “buttery-smooth” experience on the PlayStation Blog, touting “enhanced” next-gen support for 60 frames-per-second as well as haptic feedback via the PS5’s DualSense controller.

Having been a staple among Korean esports players for well over a decade, KartRider is now readying its release for consoles in the form of KartRider: Drift. Previously announced for a next-gen Xbox and PC release, the Mario Kart-like free-to-play racer is now officially riding into launch alongside PlayStation 4 next year. In the meantime, developer Nexon has scheduled an all-new closed beta session for December 8th, comprising all current platforms.

KartRider: Drift is set to release for PC, PlayStation 4, and Xbox One in 2022.

Taking a break from showcasing yet another character for King of Fighters XV, the new PlayStation State of Play saw SNK announce an open beta on the way for the upcoming fighting game, taking place on PS4 and PS5 from November 19th (7 p.m. PST) to November 22nd (7 a.m. PST). Of course, the announcement also coincided with the reveal of a new character in Delores, an enigmatic medium with the ability to “speak with the earth and control holy soil.”

Up next was the latest from studio Invisible Walls and Runwild Entertainment, a unique social deduction title called First Class Trouble. Combining the BioShock-esque art deco aesthetic with the team-based suspicion of Among Us, the title sees ‘Resident’ characters carry out tasks and avoid sabotage from disguised robots called ‘Personoids’. As a special bonus, First Class Trouble is set to launch as a PlayStation Plus freebie for the month of November.

Originally debuting as a crowdfunding project in 2015, it’s been a long road for Neostream’s upcoming Little Devil Inside, as the stylish survival RPG slowly inches its way to release. Currently boasting a timed-exclusive deal with Sony, a release is still nowhere in sight, but the State of Play event nonetheless offered illumination elsewhere, highlighting a peek at the game’s miniature-inspired world map and very Legend of Zelda-inspired sword combat.

Little Devil Inside is in development for PC, PlayStation 4, and PlayStation 5, with Nintendo Switch and Xbox One versions expected after launch.

Arguably the biggest reveal of the PlayStation State of Play presentation was saved for last, announcing an all-new Star Ocean game for the series’ 25th anniversary. Marking the newest non-remaster entry to the series since 2016, Star Ocean: The Divine Force furthers tri-Ace’s signature sci-fi/fantasy stylings with a choice-based story campaign, a neat in-world flying mechanic, and “the fastest and mightiest action in the series,” according to Square Enix.

Star Ocean: The Divine Force is set to release for PC, PlayStation 4, PlayStation 5, Xbox One, and Xbox Series X/S in 2022.

​What do you think? Did Sony bring down the house with its new PlayStation State of Play event, or did you find it particularly low-key compared to its previous showcase? Let us know in the comments below and be sure to follow Don’t Feed the Gamers on Twitter and Facebook to be informed of the latest gaming and entertainment news 24 hours a day!​