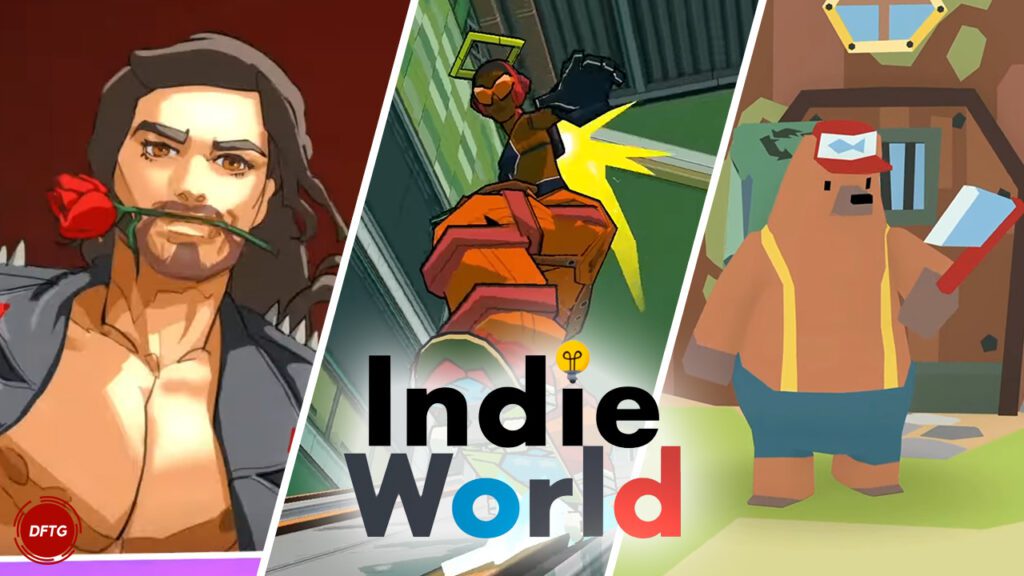 While the majority of titles from the Indie World event won’t be available for a while, quite a few games were confirmed for a surprise Switch debut starting today. In addition to the aforementioned Necrobarista: Final Pour, Garden Story, and Islanders: Console Edition, awaited games like weapon dating sim Boyfriend Dungeon and dazzling sci-fi metroidvania Axiom Verge 2 were also confirmed for an immediate release. For the occasion, Nintendo additionally launched both Slime Rancher: Plortable Edition and Curious Expedition 2 on the eShop.

Here is the full list of announcements from the Indie World Showcase, via Nintendo.

“In this graffiti-action-adventure, grind, paint and combo your way up to become an All City King, one of the best graffiti artists in a sprawling metropolis. Expand your crew with additional playable characters and make use of the intuitive trick system to get around town. All of this is backed by beats from genre-breaking artists, including Hideki Naganuma. Bomb Rush Cyberfunk launches as a timed console exclusive on Nintendo Switch in 2022.”

TOEM (Something We Made)

“A laid-back, hand-drawn adventure game in which you set off on a delightful expedition and use your photographic eye to uncover the mysteries of the eponymous TOEM. Talking to quirky characters and solving their problems by snapping neat photos, you can make your way through a variety of different, relaxing regions inspired by the Scandinavian countryside. TOEM launches for Nintendo Switch this fall.”

“Instead of playing as the hero in this innovative card-based RPG, you must craft the world that the hero travels through. Using an expanding deck of mystical cards, place enemies, buildings and terrain along each unique expedition loop that the hero explores. Powerful loot can be recovered and equipped for each class of hero, and the more loops you complete, the more your options expand, with new cards, hero classes and guardian bosses being unlocked along the way. Loop Hero launches for Nintendo Switch this winter.”

“Set sail for a new journey in this atmospheric vehicle adventure set in the post-apocalyptic universe first introduced in FAR: Lone Sails. Captain your own seafaring vessel and explore a vast flooded landscape, tackle mighty storms and overcome conundrums while embarking on a voyage to find a new home. It’s an emotional, meditative journey that doesn’t require prior knowledge of the FAR series. FAR: Changing Tides launches for Nintendo Switch in early 2022.”

“In a story about coffee and death, this anime-style visual novel follows a dynamic cast of characters as they navigate a fantasy Melbourne’s coffee culture, the questionable ethics of necromancy and the process of letting go. This expanded Director’s Cut of the original game features new story content and remastered visuals. There’s even a new Studio mode where players can create their own dialogue and stories. Necrobarista: Final Pour will launch as a timed console exclusive for Nintendo Switch … later today!”

“Become the Guardian of the Grove and explore a vibrant island to inspire its inhabitants, fend off the invasive Rot and rebuild your home. Take on requests from villagers, solve puzzles and do everything you can to help restore the community! Garden Story launches as a timed console exclusive … later today!”

“In this prequel to the original Axiom Verge, a new hero fights for her life, empowered by the same microscopic machines that gradually consume her humanity. With two interconnected worlds to explore and fight through, it’s time to discover the origins of the Axiom Verge universe. Axiom Verge 2 launches for Nintendo Switch … later today!”

“With Puzzle Knight as your guide, fight foes, recover relics and battle bosses both new and familiar in this action-packed puzzle-adventure mashup. Group together enemies to unleash massive chain attacks, and grab keys, potions and treasure as you try to escape the mysterious Pocket Dungeon. Over 10 heroes will be available, each with their own special power and play style. You can even take on a friend head-to-head in local multiplayer mode.* As an exclusive feature for Nintendo Switch, Shovel Knight series amiibo can be used to call on a familiar fairy friend. Shovel Knight: Pocket Dungeon launches for Nintendo Switch this winter.”

“This relaxing, procedurally generated strategy game sees you developing an island by placing buildings from your inventory. Score enough points and you’ll get more buildings with which to keep growing your island settlement. Then, when you can’t build any further, just start from scratch and do it all again on a different island. With its minimalist approach, intuitive mechanics and almost infinite colorful islands to build on, ISLANDERS lets you create the city of your dreams over and over in no time at all. ISLANDERS: Console Edition launches for Nintendo Switch as a timed console exclusive … later today!”

“A fresh take on Metal Slug that moves the classic action franchise into a new dimension, Metal Slug Tactics retains fan-favorite elements such as the detailed pixel art and explosive action, but adds tactical combat mechanics and roguelike elements to the mix. Control familiar Metal Slug heroes such as Marco, Tarma, Fio and Eri in fast-paced, dynamic battles. As a tactical game, positioning is key – placing your troops correctly on the battlefield can activate the Sync skill, where multiple heroes deal extra damage to the enemy. Get ready for an all-new Metal Slug experience when Metal Slug Tactics launches for Nintendo Switch in 2022.”

“This version of the acclaimed Tetris Effect features the single-player Journey mode, but also the competitive Zone Battle mode (available locally* or online**) and the cooperative Connected mode. It also includes cross-platform multiplayer, so it’s easier to find people to play with – or against. Take the Tetris Effect experience with you on the go when Tetris Effect: Connected launches for Nintendo Switch on Oct. 8.”

“Discover a beautifully detailed post-apocalyptic world in Eastward, an action-adventure RPG with puzzle-solving and dungeon elements. In a near-future society on the brink of collapse, a hardworking miner called John discovers a young girl named Sam in a secret underground facility. This unlikely pair will embark on an emotional journey to discover the truth, traveling across a wonderfully weird world and exploring bustling towns, curious campsites and shady forests. Eastward launches for Nintendo Switch as a timed console exclusive on Sept. 16, with pre-orders beginning on Nintendo eShop later today.”

What do you think? Were you impressed by all the games shown at the Nintendo Indie World Showcase? What games are you looking to play from the event? Let us know in the comments below and be sure to follow Don’t Feed the Gamers on Twitter and Facebook to be informed of the latest gaming and entertainment news 24 hours a day! For more Nintendo headlines recently featured on DFTG, check out these next few news stories: