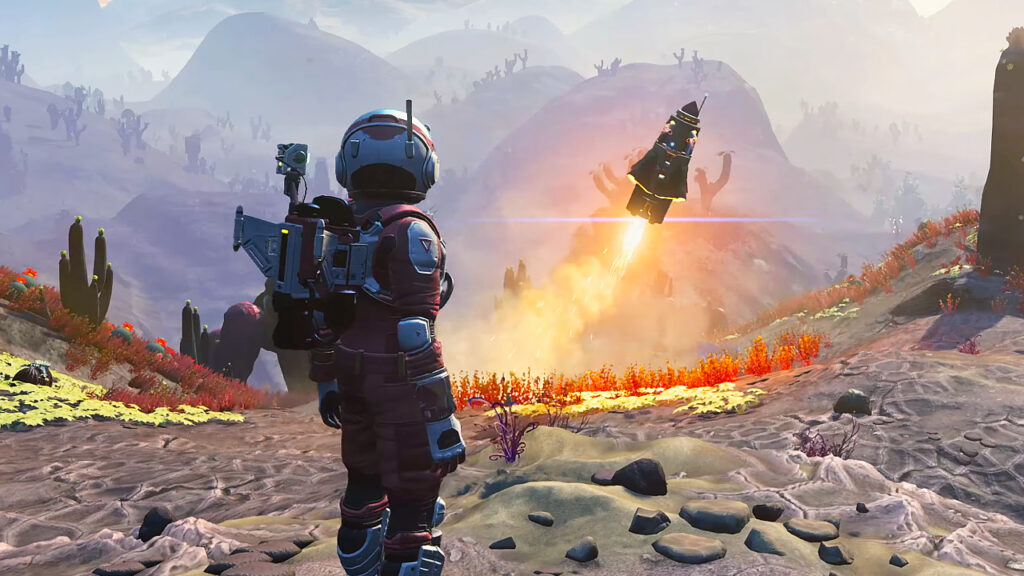 No Man’s Sky continues to be one of gaming’s most incredible comeback stories, growing beyond its troubled launch to become one of the most expansive and regularly-updated space odysseys available to play today. As the game recently surpassed six years of ongoing support, developer Hello Games has prepared yet another update to round out the festivities, with the occasion also marking its grand arrival on Nintendo Switch consoles.

Going live today, the new Waypoint update not only brings the game version to 4.0, but also introduces another hefty drop of content and feature updates into No Man’s Sky. As detailed on the official website, custom game modes are the big addition this October, allowing players to toggle a range of difficulty settings and even take part in a challenge-based Survival mode. The update also introduces seamless auto-saving to keep track of up-to-the-second game progress.

Those looking to get their trading on are in luck with the introduction of the Trade Rocket, enabling players to sell items to the Galactic Trade Network by launching their wares directly from a planet’s surface. For more low-key players, a new mode called called “Relaxed Mode” allows one to trek the stars with “reduced danger and minimal grind” for a much more minimized experience, similar to the Discovery Tour mode present in Ubisoft’s Assassin’s Creed series.

Another big addition also overhauls several sections of the menu UI – including inventory management, recipes, as well as story and faction milestones – to streamline the experience for players. No Man’s Sky Waypoint also gives environmental visuals an upgrade, beautifying planetary, space, and frequented areas like the Space Anomaly and the Atlas receiving “enhanced” visual effects. Those on PC will also get that much more with official support for AMD FidelityFX 2.0 upscaling.

With the release of the new 4.o Waypoint update, No Man’s Sky has also fulfilled its promised arrival on Nintendo Switch and the interstellar adventure comes with a number of perks. In addition to the portable benefits of the hybrid console, players will also have access to the Horizon Vector NX starship and Infinite Neon Mark XXII Multi-Tool for a limited time, with players able to redeem the deal until November 7th. We all know Nintendo loves themselves some deadlines.

​What do you think? Are you loving all the content coming to No Man’s Sky in Waypoint, or are you just glad to finally be able to explore the universe on Nintendo Switch? Let us know in the comments below and be sure to follow Don’t Feed the Gamers on Twitter and Facebook to be informed of the latest gaming and entertainment news 24 hours a day!​