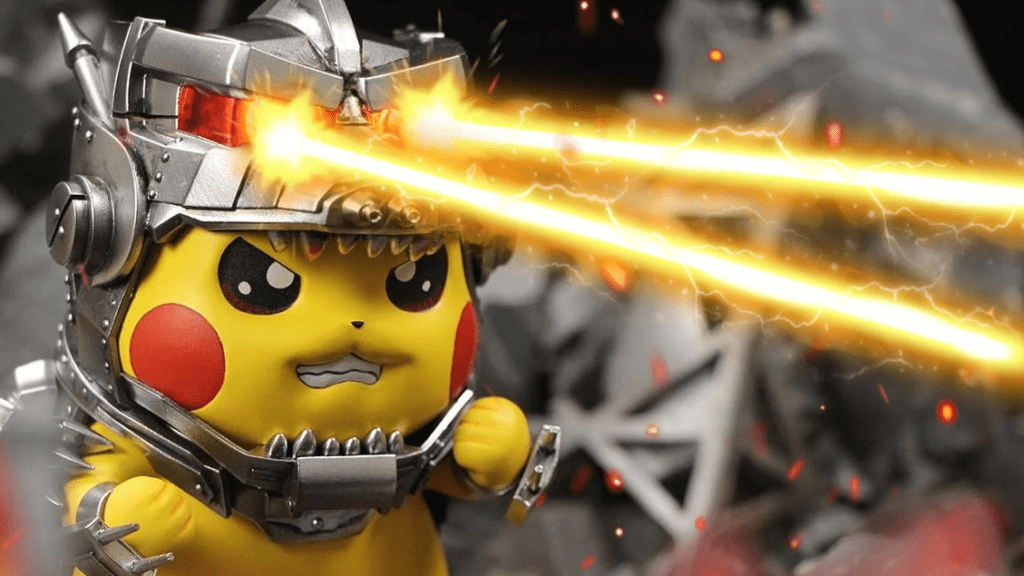 The concept of Gigantamax was introduced to the Pokémon franchise in the latest Sword and Shield, seeing various critters grow to incredible sizes while also allowing the creature to affect the world around them just by being there. These not-so-pocket monsters are not so dissimilar to the world of film and TV, which is set to see two iconic titans duke it out in the epic crossover film Godzilla Vs. Kong. For the occasion, it appears a crossover between Pokémon and the Godzilla franchise is also set to arrive, featuring a mash-up of Pikachu and Mechagodzilla.

A new figure from Hard Shell Studios recently became available for pre-order, bringing Pikachu and Mechagodzilla into a singular piece of art. While this form isn’t exactly Dynamax, it is a neat combination featuring a Pokémon who can reach great heights and one of Godzilla’s greatest foes. According to the listing, the figurine is made of resin and stands about 5.8 inches tall, including the base. Despite the small size, the piece holds quite a lot of detail from the iconic features of both Pikachu and Mechagodzilla.

While other Pokémon “cosplay” figurines are set to make an appearance, such as one of Godzilla, King Ghidorah, SpaceGodzilla, and even a Raichu version of Ultraman Tiga, a recent rumor out in the Kaiju world seems to hint at the possibility of Mechagodzilla actually making an appearance in the upcoming Godzilla vs. Kong film. Whether or not this turns out to be true or not the timing between the reveal of the figurines and next month’s release of the monster movie is definitely quite close, to say the least.

Mechagodzilla Pickachu figurines are set to launch in the 3rd quarter of this year and can be pre-ordered right now for the price of $103.99 USD. Though no official release date has been set quite yet, Godzilla vs. Kong is making an official appearance on March 26th internationally and March 31st for the US, where it will be released in theaters and HBO Max at the same time. Will you be going to see the battle between two of the greatest Titan-sized creature to ever exist? Let us know your thoughts on the Mechagodzilla Pikachu figure and more in the comments section below. As always, don’t forget to follow Don’t Feed the Gamers on Twitter for 24/7 coverage of all things gaming and entertainment.