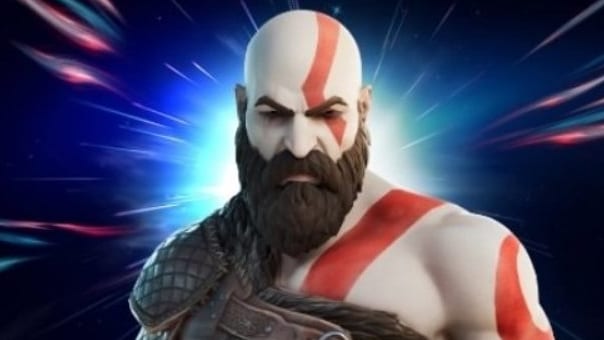 A new season of Fortnite has arrived along with a host of new points of interest, a bit of lore, and the Mandalorian. The massively popular battle royale title appears to be bringing some big hitters in the bounty hunting community across video games, movies, and more. That said, a recent leak seems to point to Kratos and Master Chief skins coming to the game.

Shortly after the new Fortnite season went live, Sony’s official PlayStation account took to Twitter to release a clue about the next character coming to the Epic Games title. In the audio clip, we can hear Agent Jonesy talking about the next character, who has “literally vanquished multiple gods with his bare hands in a fit of uncontrollable rage.” Well, if that doesn’t say Kratos, I don’t know what does.

If that isn’t a big enough clue, Twitter user HYPEX posted an image of the Kratos skin shortly after Sony’s tweet. Of course, with this being a leak, it is best to keep the salt nearby until Sony or Epic Games makes any sort of official announcement. Plus, if it is real, there is a good chance that the skin will be exclusive to PlayStation.

Kratos will be a skin soon! (Reposted for a better image) pic.twitter.com/S6lgYMcGJR

While it definitely does look like Kratos will be coming to Fortnite at some point, another leak points to Master Chief also arriving in the future. The audio clip posted by Sony obviously gives the Kratos leak a bit more weight, but we’ve seen nothing from Microsoft about Halo‘s protagonist coming to the game. However, the leak points to not only Master Chief showing up, but also a glider and Warthog as well as a Capture the Flag LTM.

I’ve tracked the source of this original image to 4Chan.

Guy who anonymously posted it claims he has a friend who works at epic who was right about Salty Towers and Mandalorian Mythics.

There will also be an Capture The Flag LTM for the Halo collaboration! (via @FNBRUnreleased & @MidaRado) pic.twitter.com/xi7be66RHu

It’s unknown at this point when or if these skins will be coming to Fortnite for the new season, but if it’s all true, we will surely know more in the near future. Keep it tuned to Don’t Feed the Gamers as this story develops, and for other gaming goodness going on right now, check out the following:

What say you, gamers? Are you excited to see the likes of Kratos and Master Chief in Fortnite? Do you think Nintendo should bring Samus to the battle royale game? Sound off in the comments section below, and be sure to follow DFTG on Twitter for live gaming and entertainment news 24/7!