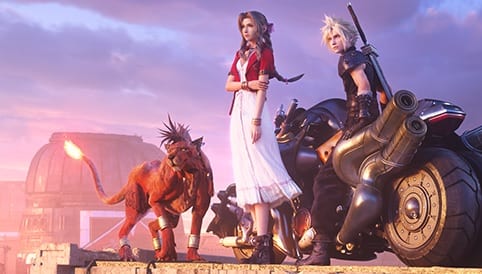 With just under 9 weeks left until the highly anticipated release of the Final Fantasy VII Remake, Square Enix is continuing to turn up the hype by releasing bits of new screenshots and trailers as we crawl slowly towards the game’s mid-April release date. Late last month, the Japanese publisher released a trailer featuring a cross-dressing Cloud Strife, our first look at Red XIII and Hojo, and some new gameplay footage. Now, Square Enix has released a new piece of artwork that works as a touching throwback to the first time our heroes step outside of Midgar early on in the game.

Square Enix recently took to Twitter to release a gorgeous image for its Final Fantasy VII Remake depicting Cloud Strife & friends on a ruined highway overlooking what is assumed to be the immediate area outside of Midgar. For those keeping track, the first places the player ends up going once the make it outside are the village of Kalm and the Chocobo Stables, with an optional visit to a decidedly skewered Midgar Zolom in between.

We hope you’re ready for it. #FF7R

Although the remade and revised events from the upcoming remake are still partially shrouded in mystery, this piece of artwork helps confirm that the ‘end’ of the first part of the Final Fantasy VII Remake will conclude much in the same way the Midgar portion of the original does, with the team escaping on a pick-up truck while Cloud trails behind on a motorcycle prior to one last boss before making their escape. I’ve personally been hoping that they kept the motorcycle sequence intact, so here’s hoping!

So, thoughts on the new artwork? Let us know in the comments section below, and as always, stay tuned to Don’t Feed the Gamers for all the latest gaming and entertainment news! Don’t forget to follow DFTG on Twitter for our 24/7 news feed!