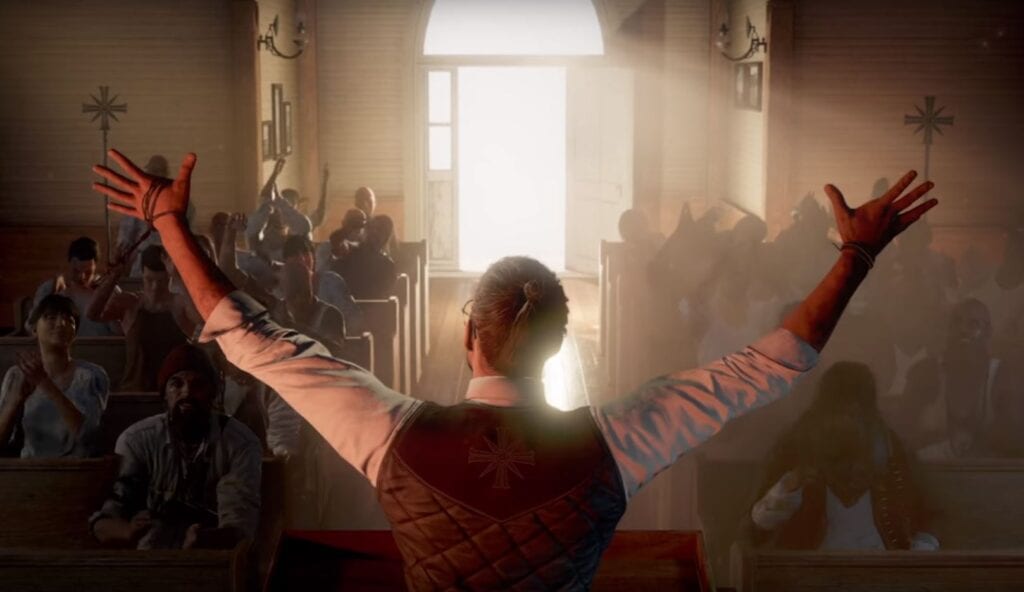 The time for waiting has come to an end, as Ubisoft has premiered the Far Cry 5 announce trailer, which gives fans the best look yet at what they’ll be up against in the upcoming title. Taking place in modern-day Montana, Father Joseph rises to power as the head of the religious cult Project at Eden’s Gate. However, this charismatic antagonist will have players and fellow members of The Resistance to worry about. Some of the locals in Hope County have decided to take it upon themselves to fight Father Joseph and his subordinates, and the game’s protagonist, a new-to-town, freshly appointed junior deputy sheriff, will be teaming up with these citizens.

Made from game engine footage, the Far Cry 5 announce trailer gives fans a taste of the chaos that has come to the beautiful, mountainous landscape that is the northwest United States. It also provides a look at some of the vehicles players will get to use while combating the militia that has come to conquer Hope County. Muscle cars, eighteen-wheelers, helicopters, biplanes, and more will be available to assist in putting an end to Project at Eden’s Gate. Check out all of the action in the video below:

Released right along with the Far Cry 5 announce trailer are videos for Pastor Jerome Jeffries, Mary May, and Nick Rye. These characters are locals and members of The Resistance. Pastor Jerome Jeffries is clergyman that will not stop fighting for what is right, even if that means picking up a gun or two. Mary May is the owner of the Spread Eagle Saloon, and she has no problem storing molotov cocktails beneath the bar in the family-owned tavern. Then, there is Nick Rye, a local pilot that affixes the devastating powers of a gatling gun to the front of his plane in order to rid Montana of the wicked evil that has come its way. You can meet these fine folks in the videos below:

The AI-controlled “Guns for Hire” will be making its return in Far Cry 5. This allows players to call on allies to assist them in taking down the religious cult. In addition to this, gamers will be able to team up with a friend in two-player co-op mode. “Fangs for Hire” is also being introduced, and this well give you the ability to train animals that follow your command, including stealing weapons, marking the enemy, and attacking on sight. Bears, cougars, dogs, and possibly more will be available to help, and much like it was in Primal, some animals are suited for certain attack styles.

It was also revealed that players will be able to customize their characters, which is a bit different than previous titles in the franchise. “When we think about what we’ve done in the past, in terms of the player character, and being able to play a very specific character… in this version of Far Cry, what we want to be able to do is make it: if you want to play as you, you play as you. You’re going to be able to choose your skin color; you’re going to be able to choose who you are. So that right off the bat, we make it your experience,” says creative director and executive producer Dan Hay. We definitely can’t wait to see what players do with the customization aspect! 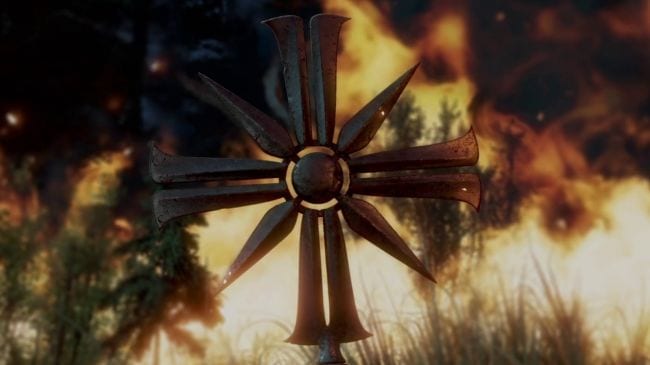 The release date for the next installment in the Far Cry franchise is also seen in the announce trailer above. February 27, 2018 is when the title will make its way to PC, PlayStation 4, and Xbox One, which falls in line with the previous announcement from Ubisoft that it would be releasing by the end of the current fiscal year(March 31, 2018). Even more information will likely pop up at E3 in a couple weeks, so stay tuned to Don’t Feed the Gamers to remain informed.

What say you, gamers? Does the open-world chaos shown in the Far Cry 5 announce trailer tickle your fancy, or is this not enough to get your hype motor running? For those that reside in the US, does it all seem a little too real or close to home? Drop those thoughts in the comments section below, and be sure to follow DFTG on Twitter for live gaming and entertainment news 24/7! If it’s more reading that you’re needing, check out the following: 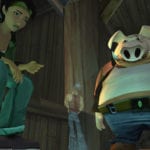 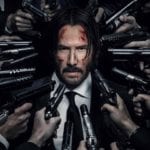