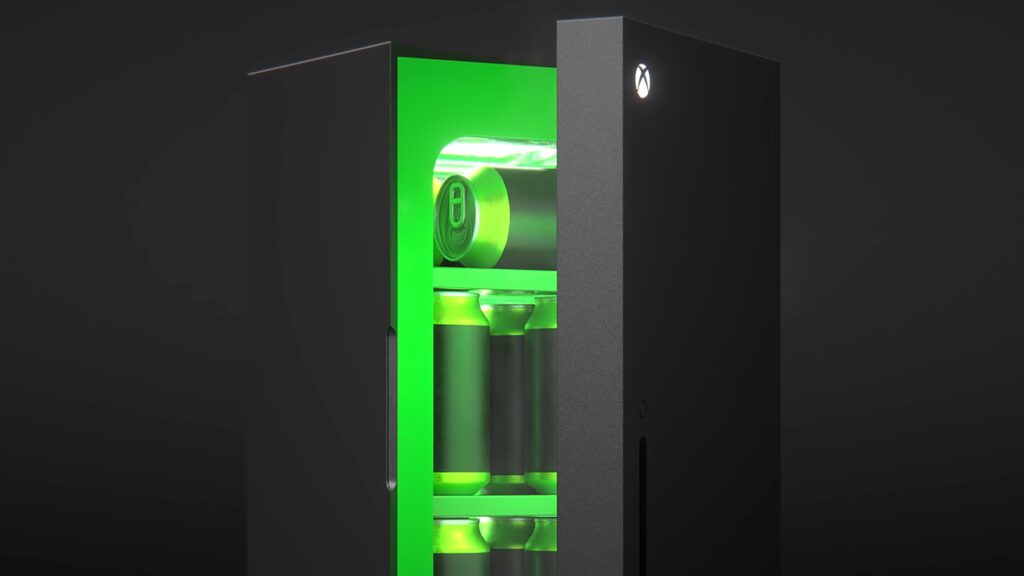 The power of memes triumphs once again! Microsoft has officially confirmed its much-memed Xbox Series X fridge concept is becoming an official purchasable product. After endlessly comparing the new Xbox to the likes of a tall, boxy refrigerator, Xbox Wire announced a mini-fridge based on the next-gen console’s design is now slated to release sometime this December under a new partnership with licensed merch manufacturer Ukonic.

Sporting the LED-accented appearance of the Series X, the new Xbox fridge has a capacity of 10 standard-sized cans, with two shelves present in the door. Also, like the original console, the cooler also comes with a front-facing USB port in addition to a portable-friendly DC power adapter. The mini appliance was first announced back in July with a comically intense trailer, as Microsoft assured fans the “world’s most powerful mini fridge” was “really happening.”

Though the towering form factor of the Xbox Series X is steeped in practicality, fans have been one to endlessly compare the touted “world’s most powerful console” to an ordinary refrigerator, and Microsoft has commendably rolled with the memed likeness all along the way. In fact, the fabled Xbox Series X fridge previously entered reality as a full-sized appliance owned by Snoop Dogg as well as the subject of several limited-edition giveaways.

According to Microsoft, the Xbox fridge is on track to debut at $99.99 USD this December, with pre-orders starting October 19th as the first wave of availability rolls out to stores. As of now, Target and Target.com are exclusive for US buyers, with Canada being directed to the Xbox Gear Shop. Fans in Europe are also confirmed to “Xbox and Chill,” with GAME in the UK (£89.99) in addition to France, Germany, Italy, Ireland, Spain, Netherlands, and Poland from Game Stop EU (€99.00), Micromania (€99.00) or Toynk (via Amazon).

​”We’re working to bring the Xbox Mini Fridge to as many fans as possible and will continue to expand regional availability in 2022, pending regulatory approvals and restrictions by market.”

​What do you think? Are you excited to get your Xbox and Chill on with the new Xbox Series X fridge, or are you worried about inventory drying up as if they were the actual consoles themselves? Let us know in the comments below and be sure to follow Don’t Feed the Gamers on Twitter and Facebook to be informed of the latest gaming and entertainment news 24 hours a day!​