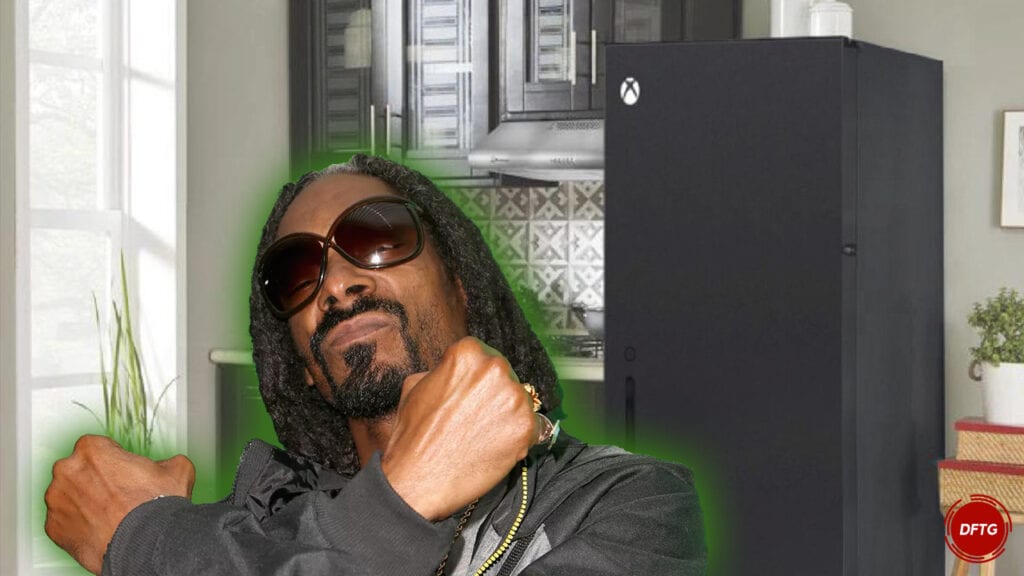 Though the rapper has seen immense success as a musician, Snoop Dogg is also well-known in the gaming community for his entertaining antics. From his legendary rant about EA servers to delivering himself a game via a fire-breathing drone, Snoop has continuously expressed his love of gaming with an over-the-top style and it appears the rapper is at it again ahead of the next-gen debut of the Xbox Series X. As revealed in a recently surfaced video, Snoop Dogg has shown off his latest piece of gaming-themed luxury: a full-size Xbox Series X fridge.

Snoop Dogg shared a look at his decidedly cool appliance on his Instagram account, showing that Microsoft had sent him a fully-operational Xbox Series X-themed refrigerator for his recent 49th birthday. The longtime celebrity Xbox fan also took a tour of the fridge’s innards, showing that it housed an Xbox Series X cake as well as an actual Series X well ahead of the console’s launch. Naturally, various pieces of Xbox bling were also aboard the next-gen appliance alongside ample quantities of gin and juice.

Following the 2019 reveal of the Xbox Series X, the console’s overt box-shaped design memorably became the subject of quite a few memes, one of the most prevalent being the hardware’s strong resemblance to a refrigerator. Recognizing the meme’s popularity, Microsoft has since steered into the Xbox fridge imagery and explained how the console’s meme-worthy design actually came to be. However, Snoop Dogg’s reveal of a materialized Xbox fridge suggests Microsoft has now fully embraced the absurdity of the X Fridge meme.

So the Xbox Series X pictures has began 😂😂 pic.twitter.com/6hQSQzSxIR

Not long after posting this incredible video, Snoop Dogg appeared to have removed the original post from his Instagram. While the exact reason isn’t known, the fridge footage is speculated to have perhaps broken some sort of marketing embargo and likely wasn’t supposed to be revealed until a later time. Despite the post’s disappearance, the existence of Snoop’s miraculous Series X fridge nonetheless spread across the internet, with a recording of the post appearing on the r/GamingLeaksAndRumors subreddit and spreading to many other social media sites from there. Upon seeing the post on Twitter, Xbox themselves notably responded to the leak with a humorous meme of its own.

The Xbox Series X and Series S will launch on November 10th.

What do you think? Are you excited to see Snoop Dogg reveal an official Xbox Series X refrigerator, or are you just wondering where you can get one yourself? Should Microsoft reveal an Xbox Series S-themed hot plate next? Let us know in the comments below and be sure to follow Don’t Feed the Gamers on Twitter and Facebook to be informed of the latest gaming and entertainment news 24 hours a day! For more headlines recently featured on DFTG, check out these next few news stories: