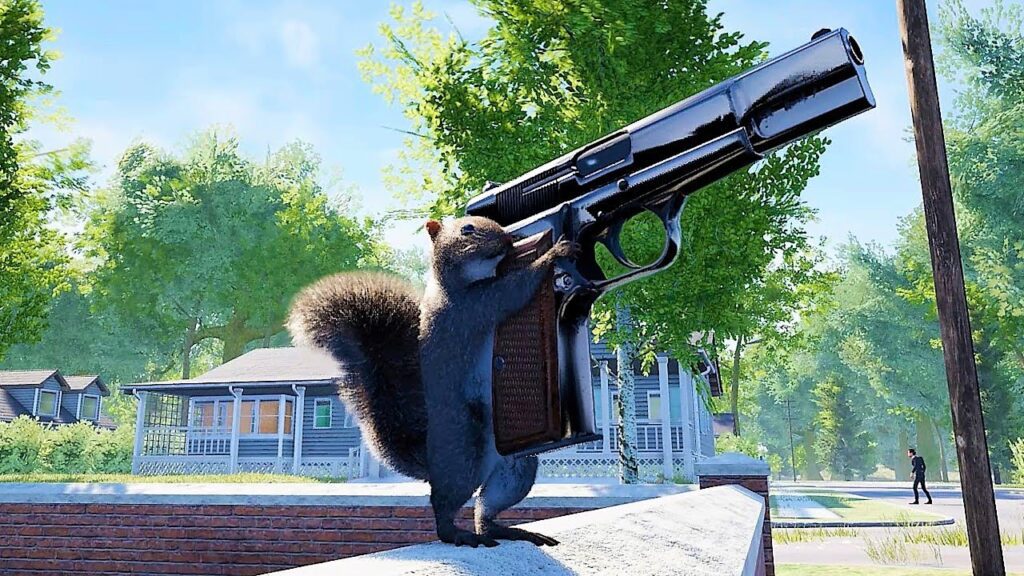 With the evolution of gaming technology in the 21st century has come the removal of barriers to entry for independent developers seeking to have their creative ideas brought to life. Tools like Unreal Engine 5 allow fresh creators the tools ready out of the box to spend more time on unique gaming mechanics and less on building the technical aspects of their worlds. One trend for such creators lately has been putting players in control of a chaotic animal, such as Goat Simulator or Untitled Goose Game. Now, a similar project has become a viral sensation, and that sensation is none other than Squirrel With A Gun.

Squirrel With A Gun creator Daniel DeEntremont has released videos of their upcoming game on social media sites like YouTube. The game’s title very much explains its simple premise; players will control an adorable squirrel in a realistic suburban setting and control deadly firearms. With the aforementioned guns, the squirrel is able to jump to new heights, fend off enemies and interact with other elements. One particular encounter from these videos has caught a lot of attention on Twitter.

The clip shows the squirrel encountering a human with an item it wants, leading the squirrel to grab a nearby gun and point it in the direction of the human. The human runs away and trips not long after, with the squirrel appearing to have successfully robbed the human of their goods. This clip has been retweeted by thousands and has boosted the attention for DeEntremont’s listing for the game on Steam. Hopefully, this also leads to more funding for DeEntremont’s project, so more guns and adorable squirrels can be added to the game! I want to see a Chinchilla with a knife next!

What do you guys think about Squirrel With A Gun becoming a viral sensation on social media? Let us know in the comments below! Be sure to stay tuned for the latest gaming news, such as the MultiVersus open beta player count topping 11 million players before the game’s full launch, here on Don’t Feed the Gamers! Follow us on Twitter to see our updates the minute they go live!

MultiVersus Season 1 Battle Pass Won't Release All At Once