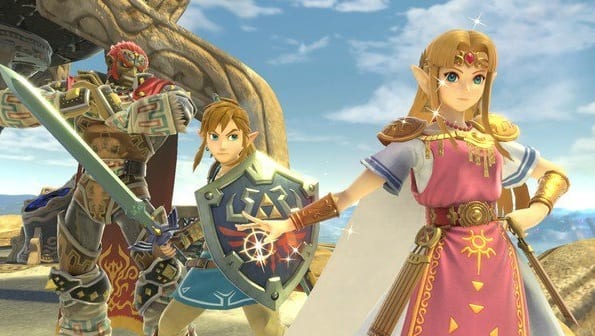 For more than a year, Super Smash Bros. Ultimate has continued to be one of the most popular video games in the fighting genre. The game’s comprehensive roster that includes every character ever seen in the series has allowed for players of all ages and play-types to fight the way they feel most optimal. Assisted by new DLC fighters, such as the recent addition Byleth, excitement for the game has only been able to grow. The game has not been shy about showing the shapely form of certain humanoid characters, including Captain Falcon and Bayonetta, but it seems that the Super Smash Bros. Ultimate Zelda model had assets unknown until now.

I was just labbing frame data I swear—

So I’m in the middle of my video editing for Shield sizes between Ver. 6.1.1 → 7.0.0, & I was skipping to the last intangible frame of her roll to start off the clip

Twitter user Masanomace recently shared an image from their recent findings when editing their gameplay footage from Super Smash Bros. Ultimate. When pausing at the final frame of Zelda’s animation, an interesting detail was spotted. At the right moment, the silhouette of the Super Smash Bros. Ultimate Zelda model’s legs can be seen opaquely through her flowing dress whilst in mid-air. Based on this view, it would appear that Zelda’s posterior would constitute what today’s youth would refer to as “extra thicc.”

Some have theorized that this may just be a glitch, while others believe that it is simply a crude rendering left in by the developers, as the details of what Zelda’s lower half looks like under the dress isn’t terribly necessary. Still, no matter where you believe Zelda falls on the Smash Bros roster tier system, there is one aspect of her that looks hard to beat. Respect to you, Miss New Zelda.

What do you guys think about this Super Smash Bros. Ultimate Zelda model’s hidden form? Let us know in the comments below! Be sure to stay tuned for the latest Nintendo news, such as the Nintendo Switch lounges coming to US airports later this year , here on Don’t Feed the Gamers! Follow us on Twitter to see our updates the minute they go live!