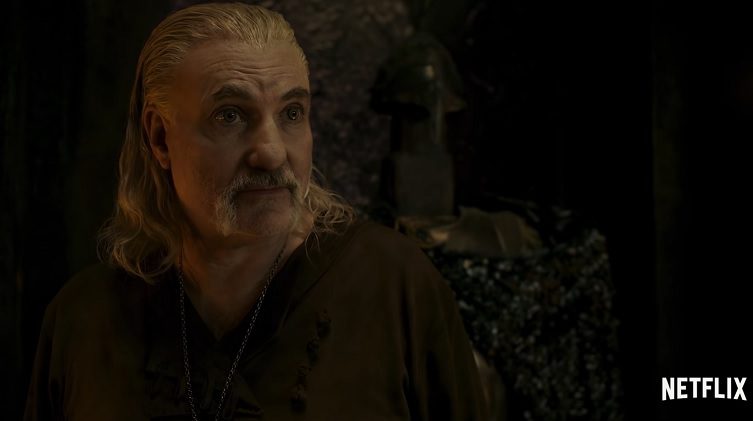 The folks over at Netflix have been quite busy working on season 2 of  the streaming service’s live-action The Witcher series. With the debut of the season arriving in just a few months, Netflix has released a new batch of trailers for the franchise as a whole, one of which provides our first look at Vesemir, Geralt of Rivia’s mentor and the star of the recently released animated film Nightmare of the Wolf.

During Netflix’s major TUDUM event that took place earlier today, the streaming platform released a special ‘Road to Season 2’ trailer for The Witcher series. As one would expect from the title, the trailer flits between old footage of the first season and bits and pieces from the upcoming release, providing fans with a tease of what’s to come without giving away too much. One of the more intriguing reveals is that of our first look at Vesemir, who is there to greet Geralt at Kaer Morhen alongside fellow Witchers Coen, Eskel, and Lambert. The trailer can be seen below, with Vesemir popping up at 0:59 and 1:14.

If that wasn’t a good enough look, Geralt of Rivia actor Henry Cavill himself also shared a shot of Vesemir following the reveal of the above footage. “A little over the shoulder of Geralt’s mentor, master and guide. Vesemir,” Cavill’s Instagram post reads. “Kim [Bodnia] very much brought a special energy to this character. Our scenes together were some of my favourites.”

While Vesemir’s role in Season 2 is still at least partly under wraps, one can assume from the dialogue that Geralt seeks to enlist his mentor in protecting and training his new charge, Ciri. How things will shake out remains to be seen, of course, though fans are undoubtedly in for quite the ride when The Witcher season 2 debuts on December 17, 2021.

Thoughts on the new trailer for season 2 of The Witcher? Let us know in the comments section below, and as always, stay tuned to Don’t Feed the Gamers for all the latest gaming and entertainment news! Don’t forget to follow DFTG on Twitter for our 24/7 news feed!