With the release of Avengers: Infinity War, one of the biggest takeaways from the large-scale superhero film was how devastating Thanos is as a villain. However, some moviegoers have been left with a much different impression, one that has led to the Mad Titan being dubbed as “hot”, “sexy”, and even “thicc”. No, seriously.

This idea may be disturbing for some to handle, but it’s not too difficult to see why so many are down with the thiccness. After all, Thanos is technically a family man (the Black Order), he’s got realistic goals (universal genocide), and has a cut physique rivaling only that of the Power Stone. He’s got it all, and by the looks of some new fan art, People magazine seems to be taking notice. AVENGERS: INFINITY WAR SPOILERS FOLLOW.

As you can see above, a faked cover of People has deemed Thanos as its newest “Sexiest Man Alive,” featuring a photo of the Titan looking much happier than usual. We suppose balancing the universe really does have a way of putting a smile on one’s face. The fan-made cover is touted as a special “perfectly balanced” issue, and gets “very personal” about the purple destroyer’s latest exploits, namely his recent daughter-throwing act in Infinity War. We also get a peek at the runners up to the sexy throne, which appears to be Spider-Man villain Venom and film composer Danny Elfman. Oh, what could have been…

While this “Sexiest Man Alive” cover is pretty clever, the original artwork comes from 3D artist Rodion Vlasov, who provided the thirsty internet with the smiling Thanos we see before us. In addition to flipping the Mad Titan’s frown upside-down, he’s also created a bearded version of Thanos, making him appear more like God of War‘s Kratos rather than the MCU’s most powerful being. Avengers: Infinity War is out in theaters now.

What do you think? Are you one who can’t resist the “Thicc” Titan, or is this news only worthy of the mother of all facepalms? Let us know in the comments below and be sure to follow Don’t Feed the Gamers on Twitter to be informed of the latest gaming and entertainment news 24 hours a day! For more from the realm of comic books, check out these next few links: 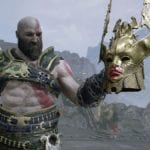