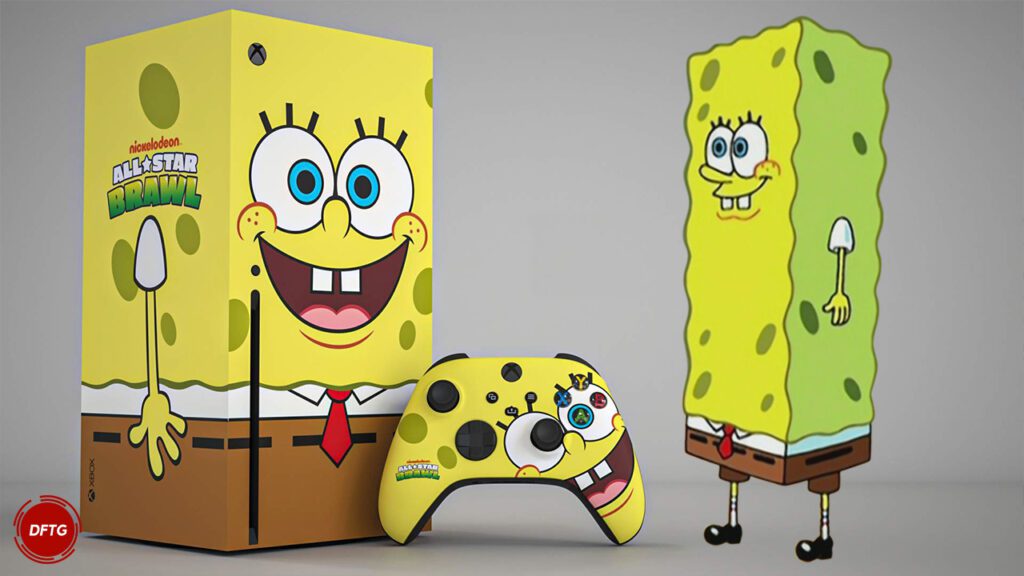 Following the recent release of the Super Smash Bros.-esque platform brawler, Nickelodeon All-Star Brawl is now preparing to get the next-gen Xbox Series X treatment by way of an all-new Microsoft giveaway. As per a new entry to the Xbox Wire, two custom next-gen consoles are currently up for grabs in the limited-time sweepstakes, with each bearing the visage of two of the title’s most recognizable fighters: SpongeBob SquarePants and Leonardo of the Teenage Mutant Ninja Turtles.

Lasting until October 24th (8 p.m. PT), fans need only follow the official Xbox Twitter account and retweet the giveaway’s announcement post (seen below) with the hashtag #XboxAllStarBrawlSweepstakes. The console and controllers themselves are particularly colorful recreations of Nickelodeon All-Star Brawl characters, with the first depicting the appropriately square body of SpongeBob and the second featuring Leonardo and a collection of graphics such as the ninja-appropriate yin-yang symbol, a proclamation of Turtle Power, and, of course, a slice of pizza.

Follow and RT with #XboxAllStarBrawlsweepstakes for a chance to win one of these vibrant @NickBrawlGame Xbox Series X consoles.

As Nickelodeon All-Star Brawl only just recently released, this sweepstakes is sure to capture plenty of attention from fans, especially as the console prize is virtually free to two lucky participants. As per the giveaway’s rules, entrants must be over the age of 18 (or receive parent/guardian consent), live in “any Xbox Live supported region,” and remain a follower of @Xbox on Twitter for at least 7 days to claim either prize. After the contest concludes, Microsoft will contact winners through their Twitter DMs on October 29th.

Nearly a year after next-gen began, new Xbox Series X/S consoles are still considered difficult to come by, and issues created by the pandemic look to keep supply low well into next year. Scarcity has consistently created a scramble whenever a restock takes place, manifesting this past summer after Microsoft opened and sold out all pre-orders for the limited-edition Halo Infinite Xbox Series X in the span of hours. There may only be two Nickelodeon All-Star Brawl consoles in this new giveaway, but at least everyone has an equal chance to get one this time around.

What do you think? Are you loving this custom Xbox Series X-themed around Nickelodeon All-Star Brawl, or would you love to see these variants put up for actual sale? Let us know in the comments below and be sure to follow Don’t Feed the Gamers on Twitter and Facebook to be informed of the latest gaming and entertainment news 24 hours a day!​