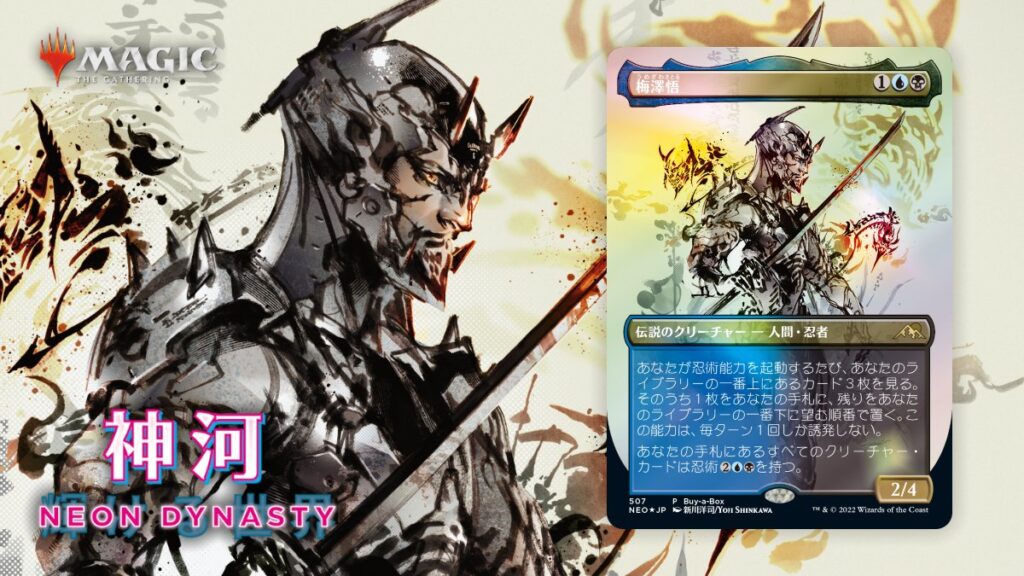 The Metal Gear Solid series is undeniably held in the highest regard among the gaming community and the tactical espionage action franchise leaves an immediate impression due to its very distinct artwork. Created by Yoji Shinkawa, the Japanese artist is often attributed to the works of Hideo Kojima, but has occasionally issued his expertise elsewhere in the medium of pop culture. Most recently, a collaboration with the Metal Gear Solid artist has led to the creation of a special new card for the tabletop game Magic the Gathering.

As revealed in a new post on social media, Wizards of the Coast revealed a trio of special cards from its upcoming Kamigawa: Neon Dynasty expansion. Depicting the ninja character of Satoru Umezawa, three variants of the card were shown to the public: the standard card, one from Xenoblade series artist Raita Kazama, and another rendered by Yoji Shinkawa. The later version is touted as a Buy-a-Box promotion, which bundles the card in booster boxes for the forthcoming expansion.

It’s that special time of the season, so how about a little present?

Here’s Satoru Umezawa from #MTGNeon, including the Buy-a-Box Promo version with art by Yoji Shinkawa (what a thrill!)

See you in the new year, with more Kamigawa: Neon Dynasty to reveal next month! pic.twitter.com/ZDeMrCTHp7

These Satoru Umezawa cards are currently expected to release alongside Magic the Gathering’s upcoming Kamigawa: Neon Dynasty expansion, which is on track to launch on February 18th, 2022. The expansion itself is looking to be a pretty interesting one, taking the traditional Feudal Japan-inspired MTG setting of Kamigawa into the far future and giving off a stylish cyberpunk aesthetic. As said in the aforementioned social media post, more about Neon Dynasty is teased to be revealed next month in January 2022.

​What do you think? Are you excited to see Yoji Shinkawa design a card for Magic the Gathering, or are you supremely hyped for the Neon Dynasty expansion in general? Let us know in the comments below and be sure to follow Don’t Feed the Gamers on Twitter and Facebook to be informed of the latest gaming and entertainment news 24 hours a day!​