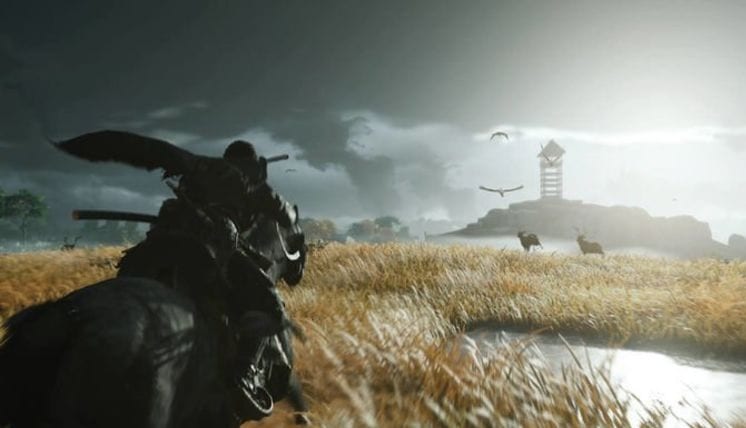 Ghost of Tsushima’s massive island offers players a massive variety of environments to explore, ranging from seaside cliffs, sweeping open fields, and the more frigid Golden Forest to the north. While it’s hard to picture the Ghost of Tsushima landscapes as anything but they currently are, the island used to be packed with significantly more tree life, to the point where it was causing claustrophobia.

Speaking to IGN on a recent episode of the site’s Podcast Beyond! show, Ghost of Tsushima Creative Director and Art Director Jason Connell revealed that, early on in the game’s development, the island of Tsushima featured tons and tons of forestation. “When we had the game built for the first, maybe, two years, it was a lot of forests,” Connell said. “It was a ton of trees and…you always felt like you were in this claustrophobic tunnel. [It was] beautiful, but really deep, forestation, which does a couple of things.”

It is very cool, but it makes it hard to know where you are without a compass or a mini map, something giving you that extra information your brain is really needing. What we did was we started opening up fields, and I definitely pulled some Shadow of the Colossus photos out, and [said], ‘Fields!’ as reference because it just feels so spic when you’re going through a massive field.”

Connell goes on to explain that there’s a bit of a balancing act to be had in terms of varied environments in Ghost of Tsushima, with such a conversation helping contribute to discussions around the end goal for the game. “Our content director, Jeff, talks a lot about content density and what is the correct density,” Connell said, continuing by stating that it’s the aspect of  “Thinking about if you were currently doing something, you’re going across the world and you run into something, how much further would you have to ride your horse before you might find the next thing? Or, can you see the next thing from where you currently are? How dense is it?”

And I really enjoyed that conversation because it let us think about what’s the right philosophy for our game. If we want to stand in one place, you just completed something, you should be able to, generally speaking, look around and find one more thing on the horizon, or see the shrine you on top of the mountain.”

Those looking to explore the island for themselves needn’t wait any longer, as Ghost of Tsushima is now available exclusively for the PlayStation 4.

So, thoughts on the design of Tsushima island? Let us know in the comments section below, and as always, stay tuned to Don’t Feed the Gamers for all the latest gaming and entertainment news! Don’t forget to follow DFTG on Twitter for our 24/7 news feed!

Yakuza: Like A Dragon Release Date Revealed, PS5 "At A Later Date" (VIDEO)