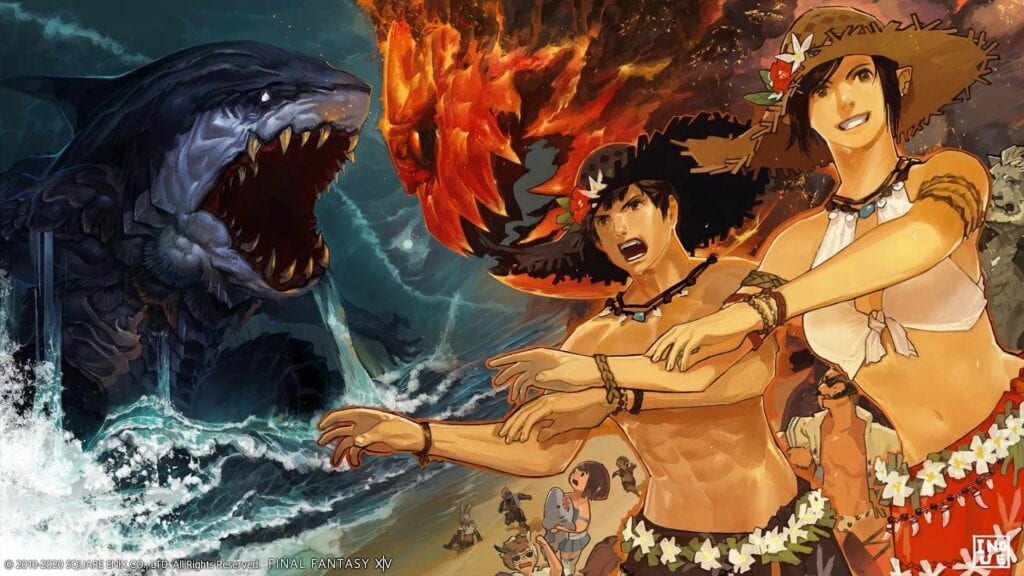 Another year brings another Final Fantasy XIV Moonfire Faire event, though this time things are a little different. For the first time since 2017, the event’s official artwork doesn’t feature a scantily-clad booty. Moving right along, this year’s Moonfire Faire is a “Summer Shark Blowout,” with the story event hinting at some “dangers” that lurk beneath the surface of the faire.

Square Enix took to its official Final Fantasy XIV website to offer up some details for this year’s Moonfire Faire. Once again, players will need to meet up with Mayaru Moyaru in Limsa Lominsa, Upper Decks to get the quest ‘A Fish Too Far’ started, after which they will be heading to Costa Del Sol for some more fun in the sun.

While the rewards for the Summer event consist solely of cosmetics and house furnishings last year, this time around players will also be able to snag themselves the special Flame Dance emote, shown in action in the middle pane of the above image. In addition to the emote, those that participate in the event will also be able to obtain a Water Bomb Stand (Outdoor Furnishing) as well as the Summer’s Flame outfit, which can be used by both male and female characters. The set is also fully dyeable, which is nice. Per Square Enix, certain items from previous iterations of the event will also be purchasable via the Moonfire Faire vendors.

So, thoughts on the upcoming event? What colors are you planning on using for your Summer’s Flame set? Let us know in the comments section below, and as always, stay tuned to Don’t Feed the Gamers for all the latest gaming and entertainment news! Don’t forget to follow DFTG on Twitter for our 24/7 news feed!