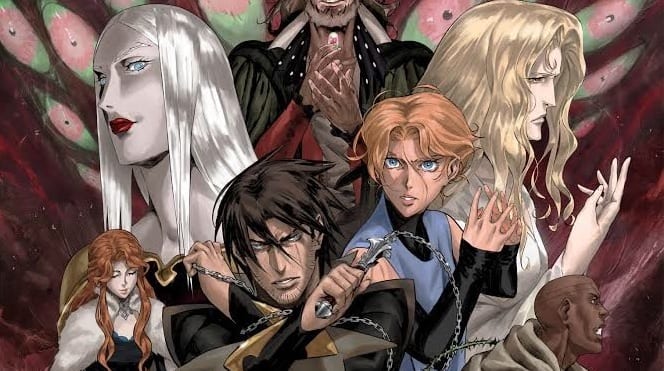 After what feels like a massively long wait, the next season of Netflix’s Castlevania series is apparently almost here! Confirmed by Netflix in late 2018, not much has been known about Season 3 of the show other than the recent new character tease by studio Powerhouse Animation. Chances are we’ll be hearing a lot more about what’s to come, as Netflix has announced that Season 3 of the Castlevania series is slated to release on March 5th.

Netflix recently took to Twitter to reveal a gorgeous new poster for its Castlevania series depicting a blend of new and old characters. Alongside the poster reveal, the streaming company announced that Castlevania is “back on March 5th,” and that “there’s more mystery, murder, mayhem, and vampires than ever.” While Dracula may have bitten the dust at the end of the previous season, that still leaves the likes of Carmilla and any other entities she recruits to her cause for Trevor and friends to contend with. The full poster can be seen below:

.@Castlevania is back on March 5th, and there’s more mystery, murder, mayhem, and vampires than ever. #Castlevania pic.twitter.com/9se4mRR2K8

The end of Season 2 of the show saw Trevor and Sypha parting ways with Dracula’s son, Alucard, though given how popular and integral to the story the latter character is, chances are it won’t be long before we see the likes of him again. Here’s hoping we’ll get a teaser trailer of some sort prior to the release of the latest season next month.

So, thoughts on the upcoming season? What do you think about the show thus far? Let us know in the comments section below, and as always, stay tuned to Don’t Feed the Gamers for all the latest gaming and entertainment news! Don’t forget to follow DFTG on Twitter for our 24/7 news feed!