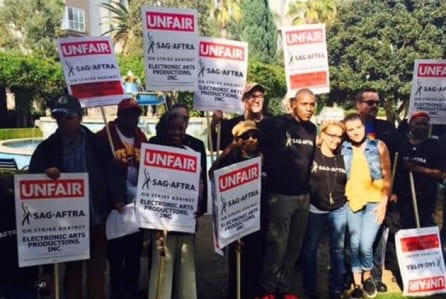 We have been posting a lot about the SAG-AFTRA strike against certain employers in the video game industry because it is something we care deeply about. Today they had their first picket line in front of the Electronic Arts building in Playa Vista California. On October 22nd SAG-AFTRA posted an update on their website:

“Unfortunately the last attempt to reach an agreement with video game employers this week was not successful and their management remains unwilling to agree to fair terms that reflect the integrity and principles that SAG-AFTRA and our membership hold true.For the past two years we have attempted to reach a fair deal with these employers and they have left us no other choice.” 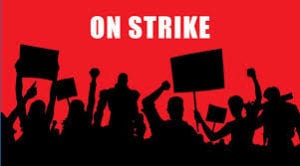 SAG-AFTRA is on strike specifically against these employers below for all games that went into production after February 17th, 2015:

As we’ve told you before, their proposals are very reasonable and mainly focus on transparency and secondary compensation when a game does well. SAG-AFTRA states that the employers have said no to most of their proposals and are not taking them seriously.

“For instance, in response to our concerns about vocal safety, they offered to put more tea and water in the booths for the actors — something they already do and this doesn’t resolve the issue or protect the actors.”

Voice actors like Jennifer Hale, best known for her work in games like Mass Effect and BioShock Infinite, have been promoting the website GameActors4All.com and the hashtag #PerformanceMatters for days. Grey DeLisle who voices Amanda from Metal Gear Solid: Peace Walker, is also actively spreading awareness on Twitter:

We asked for safety and a tiny bonus if a game made over 1M. They called us greedy and said nobody cared about voices. #performancematters

Today more than 100 people showed up to the picket carrying signs and chanting things like, “Hey, hey, shut it down, LA is a union town!”. SAG-AFTRA’s President Gabrielle Carteris told Deadline, “We are willing to stay out as long as it takes- not only the performers, but the union itself”. They also report that people from the Teamsters, Writers Guild of America, International Alliance of Theatrical Stage Employees and the Musicians Union joined in the picket line to “walk in solidarity” with SAG-AFTRA. 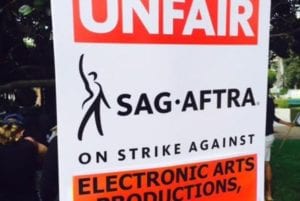 We at Don’t Feed The Gamers will keep updating as the news comes in and truly hope that an agreement can be made soon. If you need to catch up on what has been happening before this picket line today, here is a list of past articles covering the ongoing SAG-AFTRA video game strike:

Let us know how you feel about the strike and whether their proposals sound fair to you down below in the comment section. 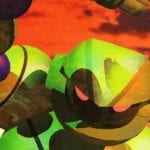 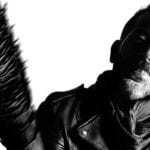 The Walking Dead Stays True to the Comic in Season 7 Premiere (SPOILERS!)