Just a few days ago, Amazon promised Kingdom Hearts III fans a special look at an all new trailer for the game, as well as some exclusive DLC for those that pre-order through the company’s website. Unfortunately, Amazon later said that the trailer had been “consumed by Heartless,” revealing instead a shorter cut of a previously revealed trailer and a lackluster Keyblade pre-order exclusive, leaving fans understandably upset and more eager than ever for their promised trailer. Thankfully, a new trailer from a more reliable source appears to be on the horizon, as publisher Square Enix has revealed that not one, but two sets of new footage will be debuting next month.

The news comes by way of Kingdom Hearts III director Tetsuya Nomura, who recently took to Twitter to announce that a new trailer would be arriving this December. According to Nomura, fans can also expect the release of new footage prior to the final 2018 trailer reveal. The tweet can be seen below:

“Hello everyone.
I said it would be next month, but I feel bad leaving it so open. The next trailer will be out in December
10th: New footage
18th: Final 2018 trailer
(JST)
We’re still editing, so times are TBC.
I really mean it this time, when I say see you next month!” – Nomura pic.twitter.com/mDyPmQo6uy

“I said it would be next month, but I feel bad leaving it so open,” Nomura’s tweet reads. “The next trailer will be out in December.” Nomura then lists December 10th as the release date for new footage, as well as the 18th for the final trailer of 2018. The director then issues a small caveat, stating that the times are TBC, as they are still in the process of editing.  “I really mean it this time, when I say see you next month!” Here’s hoping that Square Enix is better at keeping its promises than Amazon.

Kingdom Hearts III releases on January 29, 2019 for PlayStation 4 and Xbox One.

So, thoughts on the promise of new upcoming footage? What as-yet unconfirmed Disney world are you hoping will be added to the game? Let us know in the comments section below, and as always, stay tuned to Don’t Feed the Gamers for all the latest gaming and entertainment news! Don’t forget to follow DFTG on Twitter for our 24/7 news feed! 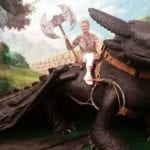