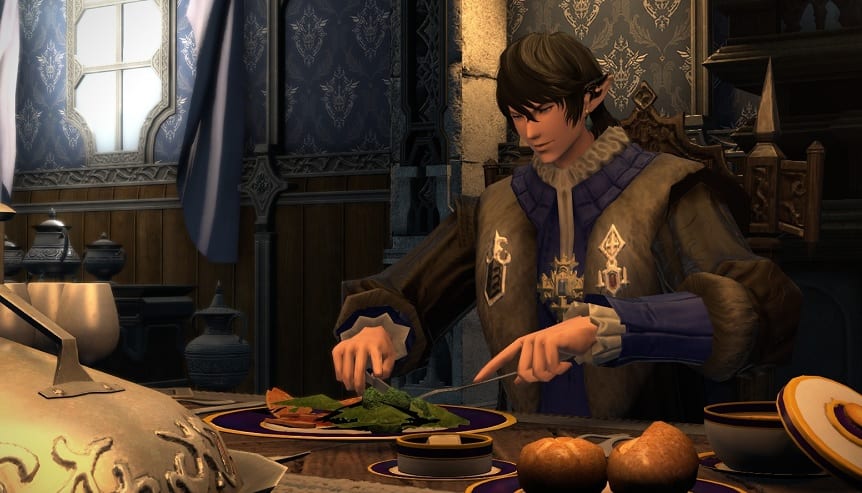 We’ve covered many gamer cookbooks over the years here at DFTG, with recipes spanning from post-apocalyptic wastelands all the way to the snowy terrain of Skyrim. As such, I am particularly surprised that there has yet to be a physical cookbook based upon Final Fantasy and all the myriad cultures on display throughout the series. Thankfully that seems about to change, as Final Fantasy XIV appears to be getting its own ‘Ultimate Cookbook’ that will be releasing later this year.

As reported by Wario64, a new Amazon listing has surfaced for The Ultimate Final Fantasy XIV Cookbook. The listing itself was quickly removed, but not before a screenshot was taken revealing some of the contents of the book. Per the listing, the cookbook will feature 192 pages and over 70 recipes from the game world. The book will additionally feature an exclusive foreword written by Final Fantasy XIV game director Naoki Yoshida.

Apparently this is a Final Fantasy XIV Cookbook. Contains over 70 recipes https://t.co/PQ3Q2PHH7yhttps://t.co/7xkoajSItf pic.twitter.com/EJRb5oRaOA

“Journey through the rich culinary landscape of Final Fantasy XIV Online,” the description of the cookbook reads. “Featuring favorite flavors from across Hydaelyn and Norvrandt and easy-to-follow instructions, this tome provides numerous tips on how to make the most of your ingredients.”

Start your day with Farmer’s Breakfast, a very famous and simple-yet-delightful dish; savor the Knight’s Bread of Coerthas; dive into La Noscea’s Rolanberry Cheesecake, and many more.”

The now-deleted listing for the Final Fantasy XIV cookbook states that it will run for $35 and will be releasing on November 9th, 2021.

Thoughts on the Final Fantasy XIV cookbook? Which game recipes are you hoping to find within? Let us know in the comments section below, and as always, stay tuned to Don’t Feed the Gamers for all the latest gaming and entertainment news! Don’t forget to follow DFTG on Twitter for our 24/7 news feed!