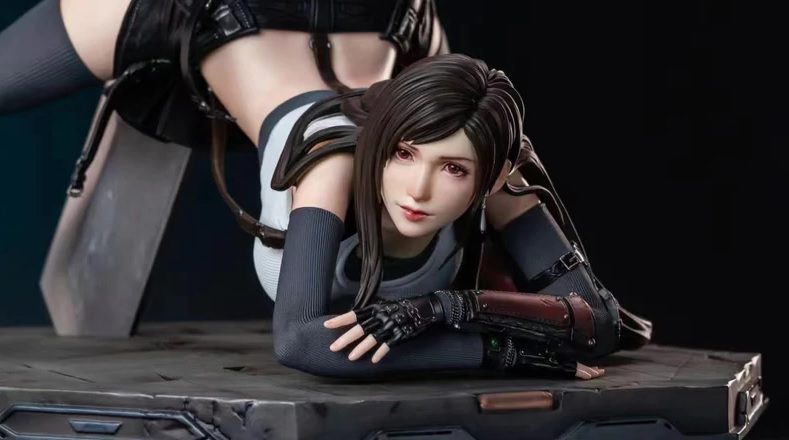 While the majority of the games within the Final Fantasy franchise have their own established fanbases, Final Fantasy VII is one of the titles with a more active group of followers. This is in part thanks to the ongoing remake series, though it is also due to the game’s diverse and beloved cast of characters. Tifa Lockheart is one such character, a heroine that has inspired decades of fanart, cosplay, and other passionate projects. Most recently, the character has become the subject of a purchasable statue that sees the character bent over in a decidedly lewd position.

Depicted above in all its, erm, glory, this newly announced Final Fantasy VII Tifa Lockheart statue sees the character adopting the Jack-O pose – coined after a pose made popular by the Guilty Gear character of the same name – in front of what is likely a very confused Buster Sword. Yes, this is in fact a real thing. No, we aren’t kidding. The 1/4 scale resin statue is by EA Studio and it comes in the standard form shown above as well as a few different variations. Yes, the other variations are nude. No, we don’t have pictures.

So, this exists:
1/4 scale statue of Tifa doing the Jack-O pose. pic.twitter.com/o66JjIuWgV

For those curious, the standard version of the Tifa statue runs for $544.99, while the advanced version with the interchangeable nude body and the advanced version with the “Battle Suit” nude body each run for $644.99. Those that would prefer not to choose can scoop up the statue with both sets of interchangeable parts for $728.99. That’s a lot of money for a twerking Tifa statue but we aren’t here to judge, only inform. Seriously I’m not judging, I swear.

The Final Fantasy VII Tifa Lockheart statue is expected to ship in Q1 2023. Those interested in placing a pre-order – or checking out a few spicy angles of the statue – can do so right here.

Thoughts on the Tifa statue? Let us know in the comments section below, and as always, stay tuned to Don’t Feed the Gamers for all the latest gaming and entertainment news! Don’t forget to follow DFTG on Twitter for our 24/7 news feed!