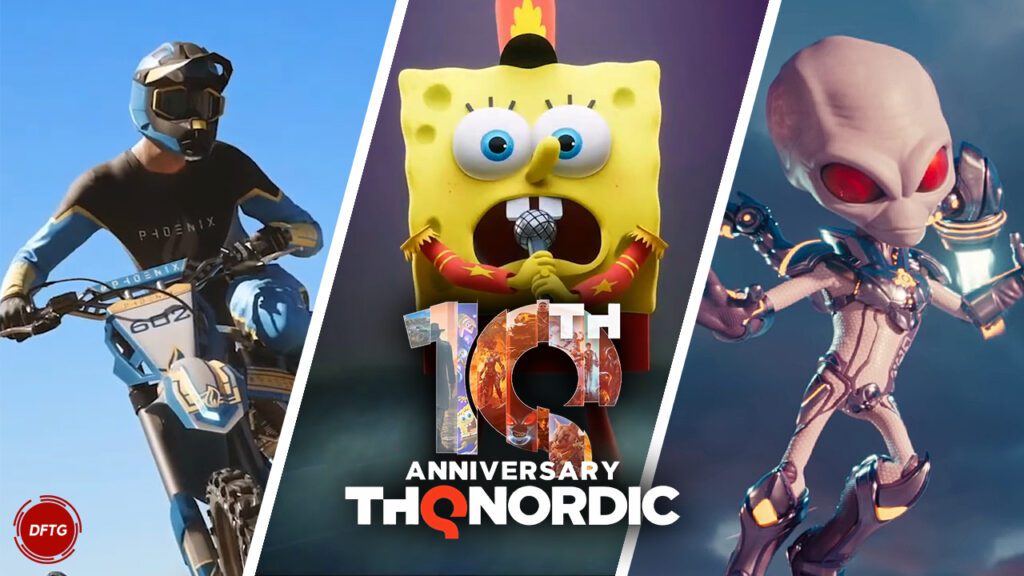 For the publisher‘s approaching 10-year anniversary, THQ Nordic has been hyping up a new showcase dedicated to its myriad of projects coming in the future. Confirming a total of 42 games (with 28 still unannounced) at various stages of development, the Geoff Keighley-hosted event unveiled a handful of upcoming highlights, including the likes of a new SpongeBob game, a full remake of Destroy All Humans! 2, as well as a handful of other notable releases. A full rundown of announcements from the THQ showcase can be viewed below.

The big showcase kicked off with a reveal for the long-expected sequel to Black Forest’s Destroy All Humans remake, with the reveal yielding two pieces of stellar footage. The first was a decidedly wacky music video-esque montage, featuring the series’ extraterrestrial “protagonist” Crypto as he maintains his forceful takeover of America in the face of consistent interference from the Soviet KGB. Hilariously narrated by a 60s-era hippy character, a follow-up video highlighted the first bits of gameplay, showing snippets of the title’s mind-control and spaceship mechanics.

Destroy All Humans! 2 – Reprobed is in development for PC, PlayStation 5, and Xbox Series X/S.

A cult classic for the last two decades, Outcast has been on a somewhat upswing in recent years, with a full remake releasing back in 2017, and the THQ Nordic event has now unveiled an all-new entry to the series. Titled Outcast 2: A New Beginning, the Appeal Studios’ otherworldly adventure is finally getting a sequel, featuring the return of hero Cutter Slade as he uses his “invader-slayer” expertise to protect the lush alien world of Adelpha. Alongside the reveal, a second trailer showed off some of the open-world landscapes players will inhabit on their journey.

Outcast 2: A New Beginning is in development for PC, PlayStation 5, and Xbox Series X/S.

The next highlight from the THQ Nordic showcase was Expeditions Rome, ​​Logic Artists’ new Ancient Rome-themed tactical turn-based RPG. Announced back in April, the ensuing footage featured likely the most comprehensive look at the historical title yet, showing off small bits of its hex-grid combat, class and weapon variety, and the choice-driven narrative. Also including the likes of crafting and troop management, the trailer also highlighted a behind-the-scenes peek at the game’s traditionally orchestrated soundtrack.

Expeditions: Rome is set to release for PC sometime in 2021.

After a several-year hiatus, the offroad racing MX vs. ATV franchise is at it again with MX vs. ATV Legends. The series’ latest installment brings back series creator Rainbow Studios for an updated bout of motocross racing fun, featuring the squad-based multiplayer Trials and a new story-based Carrer mode. The showcase also offered a small bit of pre-alpha footage featuring tracks in a beach setting, a cliffside area, as well as a traditional high-octane arena.

We all pretend to know the answers when it comes to geopolitical conflicts, but GolemLabs’ new threequel aims to digitally hand the reins over to gamers in the new strategy title ​​SuperPower 3. Offering a comprehensive simulation on matters of “demography, economics, military strategy, as well as social and political issues across the globe,” the upcoming release aims to let players take a stab at navigating the world’s issues, playing out the utopia or (likely) apocalypse that would inevitably follow.

Superpower 3 is in development for PC.

Action RPG maker Piranha Bytes already announced ​ELEX II back in June, touting a massive-scale new entry to the open-world sci-fi setting. While notably light on gameplay, a new peek at the game’s story made the cut for the THQ Nordic showcase, featuring returning hero Jax as he attempts to unite the factions of Magalan against the onslaught of a powerful and very demonic-looking dark presence. ELEX II is in development for PC, PlayStation 4, PlayStation 5, Xbox One, and Xbox Series X/S.

Okay, THQ Nordic making the original Jagged Alliance free on Steam suddenly makes sense. For the new showcase, ​​the long-awaited tactics entry Jagged Alliance 3 was officially given a grand unveiling by Tropico developer ​​Haemimont Games. While short, the first trailer offered a nice assortment of footage, with the initial half dedicated to a playfully tense enemy standoff cinematic, and the later half highlighting a new-gen approach to the series classic exploration and tactics-based gameplay.

Jagged Alliance 3 is in development for PC.

As a new SpongeBob game was teased beforehand, the finale of the THQ Nordic event wasn’t too much of a surprise. However, the reveal of the so-titled ​​SpongeBob SquarePants: The Cosmic Shake was destined to be a treat for fans, as it features a 3D recreation of the series’ classic rock ballad, “Sweet Victory.” As for the game itself, The Cosmic Shake is underway by Battle for Bikini Bottom remake dev Purple Lamp Studios and follows the titular undersea character as he obtains magical wish-granting mermaid tears and immediately wreaks havoc on the fabric of reality.

​​SpongeBob SquarePants: The Cosmic Shake is in development for PC, Nintendo Switch, PlayStation 4, and Xbox One.

What do you think? Are you loving all the stuff shown off for the THQ Nordic Showcase, or are you just wondering about those 28 other unannounced games in development? Let us know in the comments below and be sure to follow Don’t Feed the Gamers on Twitter and Facebook to be informed of the latest gaming and entertainment news 24 hours a day!