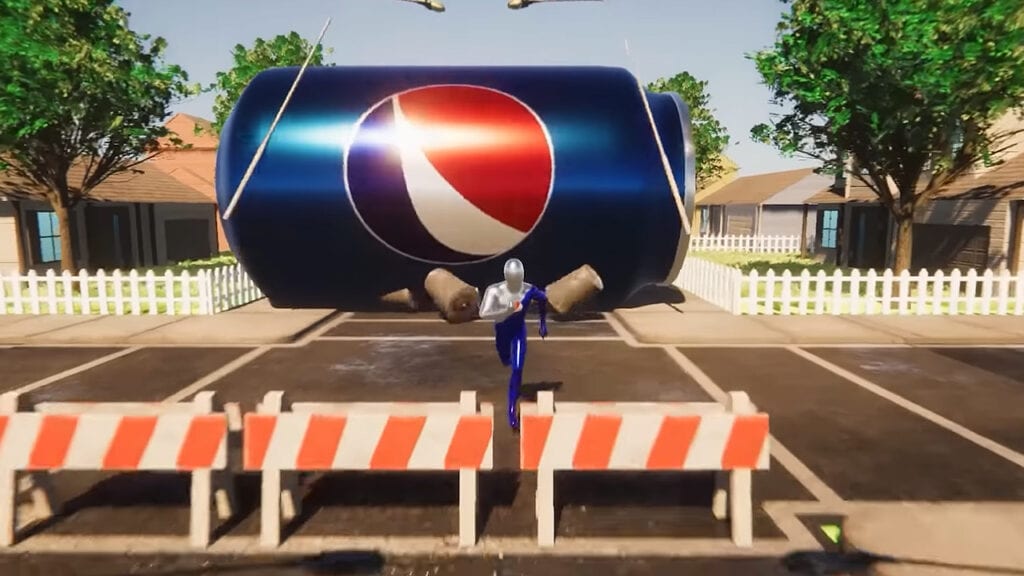 Released back in 1999 for the original PlayStation, Pepsi’s bizarre soft-drink-themed superhero Pepsiman starred in his own video game, tasking players with collecting a multitude of Pepsis in a fast-paced on-rails runner. While the faceless paragon of quench hasn’t featured prominently since his poor-selling first outing, it appears the character’s renewed cult status has earned the hero a new lease on life in the form of a spiffy fan-made remake.

Created by YouTube user Banana Pictures, the Pepsiman remake project was showcased over a 4-minute duration, recreating much of the gameplay from the PS1 game with the added visual shine of RTX ray-tracing. The footage shows the titular Pepsiman leaping over barriers, avoiding slippery puddles, sliding underneath Pepsi trucks, and trampling through strangers’ yards in the name of PepsiCo’s bubbly soft drink. We even get a peek at the giant soda can chase sequence present in the original game.

In the video’s description, the Pepsiman remake is being developed as a “personal project” and is not planned to be officially “released or distributed,” likely due to the legal shenanigans that would almost surely ensue. This video is listed as a “Part 1” in a series, with more updates on the Pepsiman remake expected to arrive soon. In the meantime, Banana Pictures has created a handful of other projects such as an RTX version of Among Us, a LEGO Mario Kart concept, and an impressive shot-for-shot remake of “Sweet Victory” from SpongeBob SquarePants.

What do you think? Are you excited to see where this Pepsiman fan remake will take you, or is a more official remake the only thing that will fully quench your thirst? Should Nintendo be bold and finally add Pepsiman to Super Smash Bros.? Let us know in the comments below and be sure to follow Don’t Feed the Gamers on Twitter and Facebook to be informed of the latest gaming and entertainment news 24 hours a day! For more headlines recently featured on DFTG, check out these next few news stories: