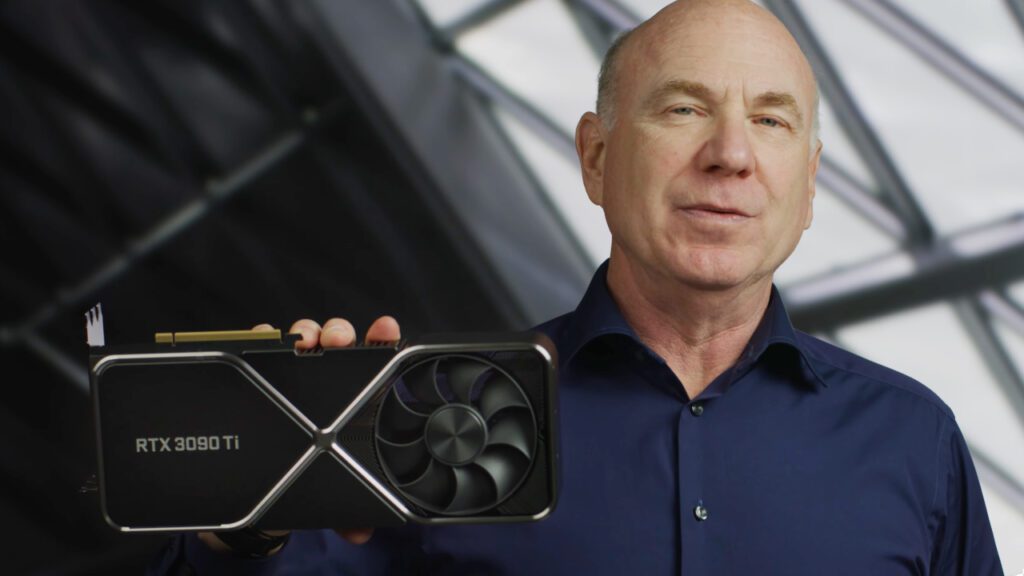 As games continue to beef up their presentation on PC, you can bet that manufacturers won’t be far behind with brand-new GPUs. Such an occasion took place at this year’s CES 2022 conference, highlighting legions of upcoming devices that will soon grace our humble gaming rigs. Nvidia notably took this opportunity to shed light on its next wave of GPUs, announcing a face-melting “monster”-class powerhouse as well as a capable new entry-level option.

All took place during Nvidia’s big “Special Broadcast” livestream, with the company’s top-tier new GPU, the GeForce RTX 3090 Ti, undoubtedly leaving the biggest impression. Unveiled at the tail end of the broadcast, Senior VP of GeForce Jeff Fisher dubbed the hardware “a monster GPU,” clocking in beastly performance specs like 40 Shader-TFLOPS and 24GB of G6X memory, as Fisher touted it as “the fastest ever” for the GPU line.

Outside the show-stopping “BFGPU,” the main star of the showcase was the Geforce RTX 3050, which was presented as a capable entry of the affordable 50 Series line. Providing a major step up from the GTX hardware before it, the RTX 3050 marks Nvidia’s first entry-level GPU with ray-tracing, DLSS, and extended frame rate capabilities, touting easy 60+ FPS support for games like Marvel’s Guardians of the Galaxy, DOOM Eternal, and Control. Releasing worldwide on January 27th, the Geforce RTX 3050 will boast a relatively small starting price of $249 USD. As for the monster-class flagship RTX 3090 Ti, nothing else was revealed about the hardware outside of the event, so the GPU’s release details and presumably wallet-emptying pricing aren’t yet available. However, Jeff Fisher did promise more information is set to be revealed later on this month.

​What do you think? Are you excited to feel the awesome power of the RTX 3090 Ti, or are you just impressed Nvidia found a way for ray tracing to be affordable? Are you holding back your hype until worldwide chip shortages subside? Let us know in the comments below and be sure to follow Don’t Feed the Gamers on Twitter and Facebook to be informed of the latest gaming and entertainment news 24 hours a day!​